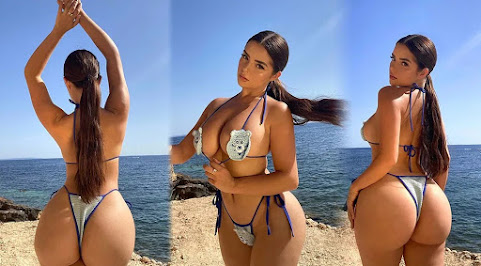 Right now the provocative fashion goodness of hottie Demi inspires this peek at pop culture, community news and info from across the nation and around the world . . .

The University of Kansas Medical Center is launching a clinical trial of a drug some doctors believe may help some of the sickest coronavirus patients.Doctors are investigating to see if a drug with the potential to slow metastasis in cancer may be used to halt respiratory failure linked to COVID-19.Dr.

JEFFERSON CITY, Mo. (AP) - A western Missouri doctor has lost his state medical license after amputating a patient's gangrenous toe on the porch of his rural office that doubled as a machine shed. The Missouri State Board of Registration for the Healing Arts revoked John Ure's physician and surgeon license in June, the Springfield News-Leader reported.

Demi Rose could bearly contain her excitement about her cute suit! The beautiful model left very little to the imagination on Tuesday. She shared some hot shots that featured herself in a tiny, crocheted bear bikini. Three small bear faces barely covered her frontside and backside as she posed in front of the blue Ibiza waters.

President Trump cast a vote-by-mail ballot in Florida this week, after months of questioning the security of the method of voting, and in doing so he returned it to election officials using a technique many Republicans say should be illegal.

Goodyear Tire & Rubber Co. dropped as much as 6% on Wednesday after President Trump tweeted to his 85 million followers to boycott Goodyear tires. Trump's tweet was likely sparked by an image that was shared on social media earlier this week that supposedly shows a slide of an employee training presentation at Goodyear outlining that "MAGA attire" is considered unacceptable at the workplace.


Bill Clinton tears into Donald Trump in his convention speech

Bill Clinton directly attacked President Donald Trump in his convention speech 'If you want a president who defines the job is spending hours a day watching TV and zapping people on social media, he's your man,' Clinton said He harshly criticized Trump's handling of the COVID pandemic 'At a time like this, the Oval Office should be a command center.


How can Wall Street be so healthy when Main Street isn't?

NEW YORK (AP) - The stock market is not the economy. Rarely has that adage been as clear as it is now. An amazing, monthslong rally has put the S&P 500 back to where it was before the coronavirus slammed the U.S, even though millions of workers are still getting unemployment benefits and businesses continue to shutter across the country.


'COVID has reduced to tatters the illusion of American exceptionalism,' anthropologist writes in Rolling Stone op-ed

" "In a dark season of pestilence, COVID has reduced to tatters the illusion of American exceptionalism. At the height of the crisis, with more than 2,000 dying each day, Americans found themselves members of a failed state, ruled by a dysfunctional and incompetent government largely responsible for death rates that added a tragic coda to America's claim to supremacy in the world."

Kansas City Cash Awarded For An EXCELLENT Cause


Tyrann Mathieu on the pandemic, Tyreek Hill - and being the Honey Badger

Kansas City Chiefs safety Tyrann Mathieu appeared with The Ringer's Kyle Brandt on his "10 Questions with Kyle Brandt" show released on Wednesday. Like most player interviews taking place in this unique year, their hour-long conversation touched on the ongoing coronavirus pandemic and its effect on the NFL.

One More Day Before Warmup

Here we go again with another winner today with sunshine and highs in the lower 80s this afternoon. Enjoy KC, we will warm back up again by this weekend.

Haha. Moral crusader Bubba Clinton certainly honored the sanctity of the Oval Office by getting his dick sucked there.

It's so funny that Bill Clinton would talk about Trump spending his days watching tv when we know Clinton spent his days getting you know what from Monica Lewinsky in the oval office.

Tyreek hill, when you endorse a POS child beater. Weird

Clinton lecturing on what the Oval Office is supposed to be used for is hilarious. He used it as a glory hole for 8 years.

And thanks for sharing yet again, Baby Burt. Your opinion is still... worthless.

I'm Bill Clinton and I endorse this massage.

Fat Don has voted illegally twice now in violation of Federal law. Mar-a-largo is a business address that he lists as his home address. This is illegal. So the fat orange clown votes by mail while simultaneously saying fraud can be committed by mail-in ballots (there is no evidence to this bullshit claim, anyone who says so go ahead and post a link proving me wrong) and votes illegally. But the cult doesn't care. You're too stupid to form a critical thought of your own.

@ 10:00 You're so stupid you don't know your facts. Donald Trump has a home in Mar-a-lago. It is a resort that is a business that is where people live or rent a condo, it is a residential area that is a business, like a big fancy hotel only huge. Maybe you've never been anyplace really nice so you wouldn't know better. Also he is not voting by mail, he and his wife are voting by absentee ballot. You also don't know this but it is a different type of ballot issued by every county in the country. The difference is that a mail in ballot is for people that are at their home address on election day and choose to have a ballot mailed to them and send it back by mail. An absentee ballot is when you will not be at your home address on election day and they mail you a ballot to fill out and mail back because you are not at home.

The guy that imports red MAGA hats from China, uses his power of the bully pullet to demand a boycott of a great American company and tells his people to buy cheaper and "better" imports.

Trump's actions cost Goodyear 6% of it's value today, hurt sales that supports 60,000 American workers, and puts their jobs in jeopardy. Of the top 12 tire makers in the world, Goodyear is the only American company at #3.

"America first" is just another Trump lie. It's Trump first and only. He just lost Ohio today.

I bet that Demi Fatass doesn't buy Goodyear tires. If you Goodyear wants to be a great American tire company, it should support American values, like the Bill of Rights and not communist values, like Bolshevik Lives Matter.