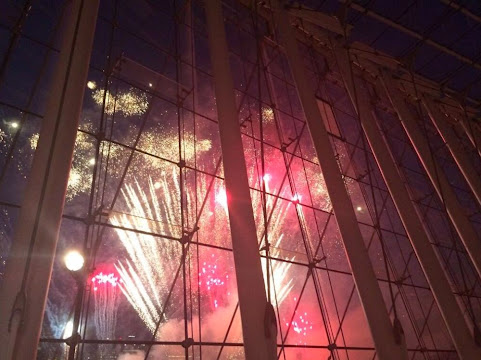 Deadly violence escalates in Kansas City as the 4th of July weekend approaches.

Amid civil unrest and the worsening pandemic, KCMO homicide has reached a historic pace with more than a 40% spike over last year.

THE KANSAS CITY'S MURDER COUNT THREATENS TO HIT 100 BY JULY 4TH WEEKEND AMID THE BLOODIEST YEAR IN LOCAL HISTORY!!!

KSHB: One woman is dead after being shot while riding an all-terrain vehicle Wednesday night in Kansas City, Missouri.

"Police said officers were called about 7:45 p.m. to the area on a report of an accident involving a four-wheeler.

"Authorities said when officers arrived, they found a woman had been shot and killed."

two murders in less than 6 hours.

On a bad 4th of July weekend KC has seen half a dozen people killed. And that doesn't count all of the shootings.

I guess handing over control to the council will fix all of this?

200 homicides by the end of the year if this level of killing continues.

9:31 you idiot KCPD isn't doing the killing, your neighbors are

^^^
Yet the current kcpd configuration isn't effective and the voters have the power to change it. Weird.

Yet making the KCPD weaker will lead to a utopia where fewer deaths will occur because of the magic fart dust I just spewed across my Count Chocula cereal. Unweird.

Isn't effective against what you asshole at 9:45. Their hands are tied. If they went out and did some real police work stopping cars and doing searches they'd maybe make a dent in things. But fucking assholes like you don't want them to do such things as in they might violate someone rights. So asshole try telling that to the family of that lady killed tonight. I'm sure they'd understand your stupidity as they beat your ass into the ground.

Oh and take your weird shit and stuff it so far up your ass we never see it again.

Since Ferguson; police officers hands have been tied. After the ANTIFA and BLM riots this year and the backstabbing by Democrat Party Mayors, police forces in all cities are at a disadvantage trying to prevent crime.

If a police officer tries to stop a crime or arrest someone and the criminial resists arrest; a co-criminal films it and then the police officer gets fired or worse yet criminally charged.

Thousands of innocent people are going to die nationwide to homicides because of back-stabbing Democrat Mayors like Lucas, the idiots in Seattle and Minneapolis, DeBlasio in New York etc.

Lots of property will be looted and burned as well wiping out small business people's life savings.

Homicides and crime would be cut in half nation-wide if the Marxist Democrat Party would support their police departments and enforce law and order to protect law-abiding Americans.

I think there are people driving around with guns just shooting at strangers. Police dont want to let the news out. People would be in even more fear. A few years ago a guy jogging on a busy street was shot dead in the middle of the day in Raytown? I think there is alot of random shootings. Which is why they are not solved. The deceased are not enemies of the shooters and nothing ties them together.

10:26 And yet, you're probably one of the people who claim there is no racism in America.

If Lucas says, "Look what they're saying about me on TKC.", you would just say he was seeking attention.

Maybe, Tony will delete your comment, but some people have already seen it & know there are feral animals like you living among them.

Take blacks out of the equation, how low would the murder count be, locally and nationally?

Yet CNN wants to ask the Mayor about a mean text message instead of the city's historic homicide pace. Also, nobody mentions the protests in relation to the Covid surge.

Is it racist to assume the perp is black...wanna know for a friend?

These quote random shootings are gang initiations. No lives matter in the thug community.

What is Lucas doing and what is his plan for Black on Black crime... murders?

Mayor 10-10-10 had an instant plan for Covad but what’s his catchy jingle for BOB crime?

He is 35 years old and clueless. Great job voters!

I agree on the change, Three strikes and you are out should be enforced. Instead we currently have 38 strikes , a milepost for our criminals . Followed by us giving them a new escalade , housing and $3,200 a month to go to school or find themselves. Keep buying dope !! And then bitching about the crime rate. f'tards.

When isn't the perp a black ? Same day that you win the lotto ?

YOUR MAYOR ISNT ONLY A FRUIT HES A STUPID FRUIT AT THAT WAY TO GO KILLA CITY MAYBE YOU CAN VOTE RUPAL IN NEXT.

COME ON PEOPLE ITS LIBERALS DYING HERE! WHO GIVES A FUCK!

The gangster is not a liberal of democrat. These animals are non-political. Just remember that the gangster can ruin a city and we could see the Suburbanization of KCMO. Tragic.

This has got to stop. Time for our secret weapon. Send in the social workers!

So BLieron, did you really leave Clarksburg, WV to move to Raytown? I guess you can scam the feds for welfare from either location.