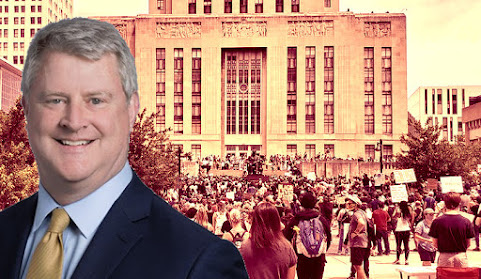 We post this tiresome missive NOT ONLY because it offers a glimpse into the brilliant legal mind of one of our many betters BUT ALSO given that the screed reminds us that publications completely subsidized by sponsors are always doomed to produce horrible, well-meaning but pedantic content.

Jeff Simon, partner at Husch Blackwell: Business, civic leader: Chains of slavery were built for profit (then and now) — together we must dismantle them

Money line in an extensive polemic . . .

"In Kansas City, maybe visit the marker down the street from the River Club where Levi Herrington was lynched by a white mob on April 3, 1882, after being falsely accused of killing a Kansas City police officer.

"Here is the point: the deepest roots of slavery are economic. Slavery is directly and inextricably bound up with business and commerce, profit and loss, opportunity and expansion. The legacies of slavery are also rooted in economics. Excluding blacks from economic opportunity means more opportunity for whites, or so the thinking goes. For example, the Ku Klux Klan enjoyed a resurgence after World War I, even to the point of holding its own big parade down Constitution Avenue in Washington, D.C., in 1925. One of the reasons for its new popularity was that poor whites returning from the military faced a tough job market and did not want competition from blacks.

"If the business community created and perpetuated slavery in this country in the interest of commerce and profit, we must then ask ourselves what moral obligation that imposes on us now."
#######

Read the whole thing, we dare you . . . There's a completely unworkable solution offered that will bring about American racial harmony along with a subtle glimpse at the many indignities that public relations professionals must endure every day.

did his secretary have to write up this crap while he dictated from on top of a horse?

Simon should be forced to apologize then fired afterword.

Hey Mr. Simon let them move into your house and take your bank account first.you are the worst profiteer.

Anything for five minutes of fame


HaHaHa during and after WW 1 the Ku Klux Klan were democrats. And when this last riot tore down statutes the BLM klan was saying there was no slavery. After all they destroyed that part of history and by voting democrat they will repeat it. Gone Baby!

If you wanted to create the perfect example of arrogant clueless white privilege, you couldn't possibly come up with anything better than this clown.
And from atop the taxpayer-subsidized office building in the Plaza.
You really can' make this stuff up!
A real candidate for this week's "Power Players" list!
Hahahahaha!!


Slavery has been in the history of all peoples, White , yellow and black..both as owners and as slaves.

"HaHaHa during and after WW 1 the Ku Klux Klan were democrats."

The Republican party has come a long way since Lincoln.

You may now return to Fox News for further talking points.

KKK will be making a strong comeback soon and rightfully so.

If he was head of the police board, he had a chance to fix things.

Things don't look fixed, do they?

He's made a career standing directly opposed to the common working man and woman. He lives a privileged life with a home off Ward Parkway and plenty of disposable income for a cushy life. Mr. Simon and his wife are Democrats, of course, that's why he's penned this article dragging his firm into the BLM anti-White melee currently swirling throughout society. It's now become a race to see which White-led organizations will resist falling upon their knees and begging forgiveness for their hereditary skin color.

Please note Mr. Simon's positive reference to Congressman Carwash's wife, Dianne Cleaver, and her work with the Urban Neighborhood Initiative. Though no word at all on both Cleavers defaulting on an SBA loan which they both personally guaranteed, and never repaid despite a final court judgment ruling against them. Doesn't Mr. Simon respect the court of law and the judges which preside over them?

Jeff Simon is among the worst type of Democrat, namely the wealthy White business class who routinely use and abuse people of color for their own power and enrichment.

He forgot to add that many trade unions were formed to shut out black men who were moving north to take jobs that the unions wanted to reserve for whites. Of course when the history of discrimination is rehashed they conveniently omit any reference to union participation.

These types of people may be hard to understand, but one can rest assured that they're all about themselves.