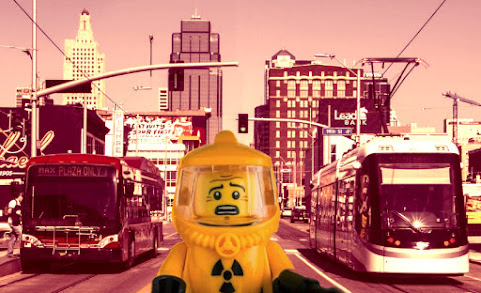 Hipsters and the so-called "creative class" always spoke fondly of the "disruptor" in the world of biz because they believed they were on the right side of the new tech economy equation. Now, the pandemic has changed the rules and become a disruptive force; shifting global financial markets in a manner far more transformative than a nifty phone app.

Car & Driver: Transportation Isn’t Going to Be the Same after Pandemic

"People are going to be walking away in droves from Uber, Lyft, and public transit after the pandemic, IBM found in a study of 14,000 people."

DISPUTE THE DATA ABOUT PANDEMIC FEAR OF PUBLIC TRANSIT BUT PLEASE BRING YOU'RE OWN EVIDENCE TO BACK UP SUPPORT FOR THE FREE BUS, TOY TRAINS AND SKETCHY RIDE SHARE!!!

Let's not forget that we're seeing a local confirmation of the newfound aversion to public transit given the confirmed 57.81% decline in streetcar ridership in March.

So far what we've seen from transit activists is nothing but online bullying, a rigid adherence to tech boom economy talking points and a refusal to admit that the pandemic has fundamentally changed the economy and how people will do business in the foreseeable future.

The bus has a better future because it's for poor people and there will always be poor people.

However, the "Free" bus is another story. People with low incomes can pay for their fare and demand better service. Take the payment away from them and they are powerless. You've eliminated any incentive for consumer service and just made everyone a slave to the bus.

Most riders just want better service, not freebies. They're willing to pay a fare rate.

Too bad Mayor Lucas and the council were just dying to put everyone on welfare.

All aboard the covid bus! Fun times!

Even if they gave free Covad-19 masks away on the Trolley car-
There is no way I ride it.
Look what mass transit did to NY.
Enough said.

No more expansion until we start filling the potholes and fix the broadway bridge!

YA THATS IT CORONA KILLED YOUR 50 ft TRAIN

NEXT ARTICLE. CORONA BANKRUPTS KILLA CITY NOT THE 50 yrs OF DEMOCRAT LEADERSHIP

KEEP VOTING FOR THESE LIBERAL CROOKS AND YOULL BE DETROIT

KEY. THE DEMS BLAME EVERYONE AND EVERYTHING ELSE BUT ARENT HELD ACCOUNTABLE FOR NOTHING

I didn't bother with the streetcar after and walked 1 mile. The homeless people sleeping on the streetcar didn't appeal to me. The bus is an unpleasant experience in all situations. KC MO doesn't understand improvements in ridership are a function of improvements in the service. Ultimately the driverless ride share will overtake the driver ride share; but in the interim Uber and Lyft will continue in the current state. With people at home the need for ride share services is limit.

All those downtown apartments and KCP&L will be going empty by the end of summer, Rona is gonna change how people live, no longer will they be stacked like cord wood like they were in New York, bye bye downtown, you weren’t good for kc to begin with.

The curve will rise after the lockdown ends...but the Media will just quit talking about it so much. That is how the Leftists will convince the deplorables that it's all better now. Think about it...what do the Leftists care if Deplorables Die? Fools.

The same IBM study released by Car and Driver (a magazine dedicated to private auto ownership) stated that "the pandemic will leave many people unwilling or unable to buy a car. The survey found that more than quarter of respondents said lack of confidence in the economic outlook will have an impact on their decision to buy a vehicle. A similar number of people said they were going to hold off on buying a car for at least six months." I would add that auto sales were down 48% in the USA in April compared to April 2019. Wouldn't that suggest that public transit will become more important in the future?

When a sinkhole opened up on the streetcar line, the ToyTrain officially became a money-pit!!!

No you idiot it just means people are not going to waste their money on a new car. Has not one fucking thing to do with public transportation.

8:15 it’s temporary, to suggest anything else is ridiculous

Is "Captain CAPSLOCK" on the rag again?
Homosexual Menopause is a terrible thing, isn't it Cappy?

The stupid street car was never intended to be mass transit. Cover that hole before any more money is poured into it.

if you want to buy a car but can wait, you probably should.

go for new at a big discount or used at almost free.

los angeles docks are full of new cars and some are being held offshore on ships, similar to oil.

don't buy till you see the whites of their eyes.

Downtown is dead! Now fix the rest of this shithole city before we turn into Detroit.

What the shut down chumps do not realize is that the effect of the shut down is going to be lower pay, shittier benefits and higher unemployment - exactly what the corporatists and globalist want. Shit heads.

No street car expansion. BUT what about the Ghost Hotels in Downtown Kansas City Missouri. Will they ever be at Seventy percent capacity .People will Travel be only a few to Large And densely populated cities.

next, wickham james & justus recommend further embracing green new deal protocols by constructing a smaller and nicer nelson-atkins. Remove the older stone structure and replace it with a smaller, glass walled building in the shape of a cockeyed 'R'.

installations will include the option of wearing 3-d googles while standing within a small scale replica of KCI while terminal A gets stomped on by godzilla and overrun by a swarm of killer tomatoes.

"People are going to be walking away in droves." Or maybe they drove away in a wok.

Gopher boi is having a meltdown now that kc has collapsed and downtown has gone empty..... along with the airport!

Contact attorney Arthur Benson. He can solve this. Just look what he did for the school district.

Just an continuous of KC's marketing plan " how to Spend the Most tax payer bucks for the least amount of return and usage " Policy. Kc has been really effective in that Policy. Where is that Bike Lane ?

Neither the virus nor anything else is ever going to kill the zombie vampire streetcar.
Like most every quasi-public organization that clueless electeds create, THE streetcar's sole priority has become its own self-preservation, expansion, and expenditures of constantly-increasing tax dollars.
Not silver bullets, or a wooden stake, or garlic, or even repeated rejection by voters will flag THE streetcars voracious appetite.
When the KCMO world comes to an end, there'll be just cockroaches and THE streetcar left.
Momentum!

The best way to get over this covid is for people to get out and about, ride the streetcar, rub shoulders and spread the germs and viruses so that we build antibodies.

Folks aren't putting miles on their cars due to stay at home orders. Thus they will just keep their existing car another year instead of buying a new.

Mass trasit is if you are on a suucide mission to get coronavirus.

7:19 is right. Who wants to move to a high rise downtown apartment building where you have to ride elevators with other germy people every day.

Who would live in high density are like power and light and risk getting the virus? Not boomers and geezers.