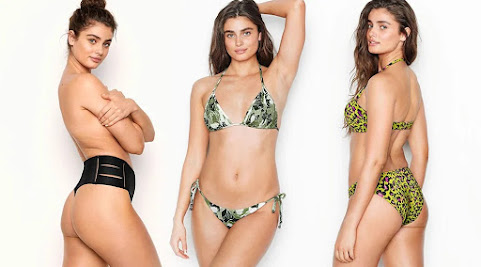 In the last days of the American lockdown, 24-year-old hottie Taylor Marie Hill keeps up with the lingerie promo grind as we check pop culture, community news and info from across the nation and around the world . . .


New web portal links to face masks, other safety items that are 'Made in Kansas City'

A shop focused on promoting and selling goods 'made in Kansas City' has built a website that provides a vetted list of local KC Metro businesses making and selling face masks, hand sanitizer and face shields. The new website - KCPPE.com - is geared toward employers needing supplies for reopening during the coronavirus pandemic.

When the coronavirus forced Kansas City area classrooms online in March, Raytown school officials noticed almost all students logging in for their daily schoolwork. But as time wore on, that number dwindled. At times, up to 40% of students in grades three to 12 were not clicking in.

FAIRWAY, KS (KCTV) -- KCTV5 News has been named winner of four regional Edward R. Murrow awards. Of the awards given to journalists, the Murrow Awards are among the most respected journalism awards in the world.

Stoner Mag Pulls On Experience With Panties For Help

Financially struggling Hightimes Holding Corp. has a new CEO - its third since December. The company, which owns stoner magazine High Times, has appointed Peter Horvath, most recently CEO of Green Growth Brands, to replace Stormy Simon, who resigned Monday after four months on the job.


Howard Stern to Trump supporters: He hates you and so do I

Howard Stern says he and President Trump are both showmen who love a good time - and they both hate Trump supporters. "One thing Donald loves is celebrities, he loves the famous," Stern said on his SiriusXM show Tuesday. "He loves it. He loves to be in the mix."

A British railway ticket office worker has died from Covid-19 after being spat on while she was working at Victoria station in central London.

RIO DE JANEIRO - Flipping through the news several weeks ago, Carlos de Lima Belucio grew alarmed. People were panicking over a strange new disease. Other countries were locking down. Then it hit him: There was only one way to save the country. Brazilian President Jair Bolsonaro had to stage a military takeover.


Democratic proposal includes new stimulus payments of up to $6,000 for families

(CNN) -- House Democrats want to send Americans a second round of stimulus checks worth up to $6,000 per family as part of the $3 trillion coronavirus relief package they rolled out Tuesday -- the largest in history.

KANSAS CITY, Mo. - It's a question weighing on the minds of parents with school aged children: What is going to happen in the fall? FOX4 contacted numerous school districts in the metro area to find out what their plans are for re-opening school. The answer: It's too early to tell.


Arrowheadlines: Adidas couldn't lose out on Patrick Mahomes after turning down Michael Jordan

How Patrick Mahomes could be the next Michael Jordan | Arrowhead Addict Even Adidas wanted their shot at Mahomes, and they did not miss out. Despite Mahomes' alma mater of Texas Tech being partnered with Under Armor and the NFL's partnership with Nike, he charted his own path with Adidas.

More clouds on Wednesday, and warmer weather arrives later in the day.


Trump supporters to Howard Stern; We hate you too and suggest you go to one of these other countries you hold so dear, along with the other traitors in Kansas City and surrounding areas.

Iran you can search for the millions Obama let disappear over there.

North Korea and continue to throw money at little rocket man like Obama did to keep him from having his fits of anger against our country.

Mexico and we can see if that country will help you the way we have helped them.

Or any of the other countries that are primarily muslim, that Obama said he would stand against the United States for.

You sure told him, didn't ya chud?

Us to Trump Supporters: Particularly @6:25AM-Why haven't you ingested bleach yet? FYI: Obama never, ever, said he would stand against the US. Never happened. That's you lying and being a fake human.

^^I did. It's not in there liar. That's you lying again. Sorry, CHUD you're a liar and a moron.

He didn't need to say it. He and his flunky John Kerry, who has hated America since the Vietnam War, gave Iran $150 billion dollars they had converted to euros so it couldn't be traces and it went right to ISIS, to kill people all over the Middle East. Including Americans. My source is the New York Times. When asked during a news conference at the end of his term about identifying "radical Islam," President Obama blamed the unrest in the region on the Crusades, the last one of which ended in 1492. I heard it live on NPR. Certainly Biden doesn't remember any of this.

^^^Geesus, STFU and take your victimization and grievances somewhere else or just get a fucking life already. I'm guessing you stew all day, every day over bullshit conspiracies and brown people because you have absolutely nothing of value happening in your pathetic fucking life.

It's a matter of public record. Get some therapy. You have anger management issues.

^^ Don't get CHUD dude pissed, he will only vomit 'chud' more often along with his worthless socialist posts.

^^and yet America has always been a socialist country. CHUD. Weird.

What are the Democrats going to do when "Lockdown until November 4" fails, just like the rest of their failed schemes to remove Trump?

^^He'd have to get your wife's mouth off his dick first. Cuck.

John Kerry "hated" America so much, he went to fight for his country in Vietnam and got a purple heart.

Cadet Bonespurs is still recovering from the fake disability he used to dodge the draft and avoid serving his country.

Trump hates everything except himself and his money. He does hate his supporters. He has made fun of southerns as dumb rubes and ridiculed and disrespected the military. Most people have finally rejected the con and accepted the truth.

Stern is the king of media and worth half a billion dollars.

6:25's broke ass is in his mom's basement, posting his anger and lies on a local conspiracy blog.

3:09: And draft dodging is a Trump family tradition!