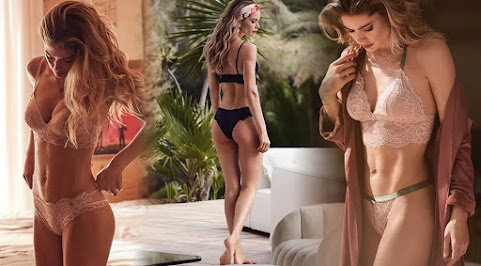 We return to the discourse after just a bit of a morning delay but looking around local news, it's seems that we didn't really miss much. So let's just jump into it . . .

At 35, hottie Doutzen remains at the top of her lingerie game and inspires this #TBT midmorning nicer news check featuring pop culture, community news and info from across the nation and around the world . . .

GARDNER, KS (KCTV) -- For the first time in 12 years, the U.S. Air Force Thunderbirds will be at the Kansas City Air Show this fall. The U.S. Army Golden Knights Parachute Team will be there too. Another first for the show is that it'll be held at the New Century Airport.

Fire investigators in Kansas City, Kansas, said the cause of Tuesday's fire at a historic church is undetermined."There was no power, no utilities to the structure, so something brought a heat source in there to ignite something," said John Droppelmann, fire marshal with the Kansas City, Kansas Fire Department.Built in 1887, the church served as a centerpiece for the Mexican-American Catholic community.

With St. Patrick's Day around the corner and at least $6.16 billion expected to be spent for the holiday this year, the personal-finance website WalletHub today released its report on 2020's Best Cities for St. Patrick's Day Celebrations as well as accompanying videos, along with stats about the holiday in its St.

Turns Out Coffee Can't Save The Planet After All


No reusable cups: Starbucks will temporarily pause the use of personal cups over coronavirus fears

Starbucks is temporarily stopping use of reusable, personal mugs in stores because of the coronavirus, the coffee giant announced Wednesday. In an open letter posted on the Seattle-based company's website, Rossann Williams, executive vice president and president, U.S. company-operated business and Canada, wrote how the company has "taken a series of precautionary steps in response to this emerging public health impact."

Sometimes They Come Back

Republican lawmakers are surprised and disappointed by the results of Super Tuesday, which firmly re-established former Vice President as the front-runner for the Democratic presidential nomination and dealt Sen. (I-Vt.) a major setback. Republican senators conceded Wednesday they would rather face Sanders, a self-described democratic socialist, as the opposing nominee, instead of Biden, whom they consider more mainstream and tougher to draw a contrast with.

Supreme Court Justice John Roberts' rebuke of Chuck Schumer over remarks he made at an abortion rights rally risked hurting "the notion of judicial independence" and "public faith" in America's top court, two senior lawyers have said. The Obama-era U.S.


'Biden can finish Bernie off in Michigan'

One week from now, Sanders may not even win the state. Even before Sanders' woebegone Tuesday - marked by losses to Joe Biden throughout the South and in Massachusetts and Minnesota - a Detroit News/WDIV-TV poll put Biden ahead of Sanders by nearly 7 percentage points in Michigan.

Doutzen Kroes - Showcases Lingerie Campaign 2020 Doutzen Kroes heats things up as she appears in a new lingerie campaign. The Dutch-born model, 35, looks stunning as she showcases the latest looks from Hunkemoller. She features in the Dutch brand's spring-summer 2020 "Doutzen Stories" campaign.

KANSAS CITY, MO (KCTV) -- We haven't even reached the regular season, but the Royals are already changing their schedule to help out the Super Bowl Champion Chiefs. Historically, the Super Bowl winner opens the next season at home. So, the Royals will play a double-header with the Oakland Athletics on Sept.

Seen any unseen films lately? That unusual opportunity will be presented to probing cinephiles at the inaugural Kansas City Underground Film Festival running March 12 - 22 at the Westport Coffeehouse Theatre. "There are a lot of great movies that people don't get to see," said Willy Evans, the free festival's 27-year-old director and co-founder.


This week is a good time to fly a kite

FAIRWAY, KS (KCTV) - If someone tells you to go fly a kite on Thursday or over the weekend, don't take it personally. Sometimes, when it comes to the wind in March, it can really blow. I mean really blow or howl at more than 50 miles per hour.

Panties and posts. Thanks, T.

Yes, Willie, and there are a lot of really crappy movies that people can see - if they go to one of your "Underground Film Festivals"!

I want to commend the President for how he has handled the CoronaVirus situation, especially his early decision to shut down access into our Country from China, despite strong opposition to that decision.