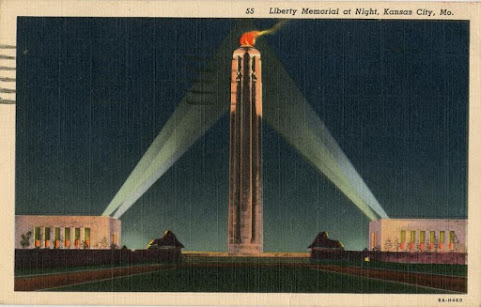 For our late night denizens we share a classy, complicated and extremely intelligent bit of Kansas City creativity . . .

Images from the collection at the National WWI Museum and Memorial -- Premiered May 20-22, 2016 in Helzberg Hall at Kauffman Center for the Performing Arts in Kansas City, Missouri

Kansas City historians and artistes compiled quite a few multimedia presentations for "The Great War" centennial but this was probably the best . . .

"The Kansas City Symphony commissioned Leshnoff’s Symphony No. 3, which commemorates the centennial of America’s entrance into World War I. It’s one of 10 symphonies Leshnoff has completed or is working on that are based on various aspects of Jewish mystical thought. His approach grows from his Orthodox Judaism."

"Jonathan Leshnoff has struck an intelligent balance in his Symphony No. 3, the third movement of which sets excerpts of letters by American World War I combatants overseas. Leshnoff pored over letters in the archives of Kansas City’s National World War I Museum and Memorial, a world-class institution (built in 1926 and reopened, in a greatly expanded version, in 2006) that has been the center of international attention during the Great War’s centennial commemorations."