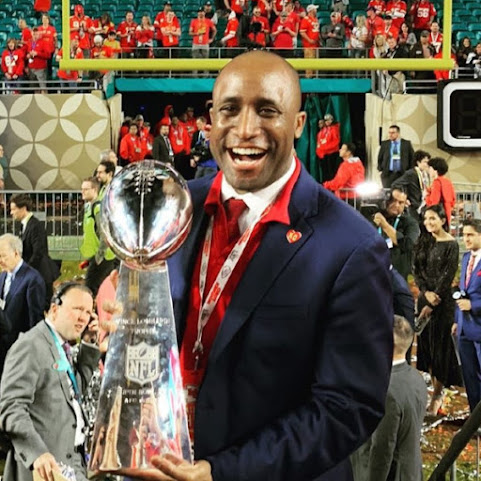 While Kansas City was watching the Super Bowl, scarfing down BBQ and guzzling booze there was deadly stabbing in the urban core. In another vicious example of local real life, earlier in the day police started an investigation into a corpse burned at one of many local homeless camps.

In a desperate move to disguise their own failings . . .

THE SUPER BOWL VICTORY BELONGS TO THE KANSAS CITY CHIEFS, THEIR ORGANIZATION, FANS AND NOBODY ELSE!!!

The bandwagon will be overflowing during the parade but the shared glory represents a dangerous proposition . . .

Already this town earns a disappointing grade for fiscal health and the intoxicating glitz and glamour of the Super Bowl threatens to distract local residents who always get left holding the bill.

And so, on this morning when so many residents are nursing a hangover from Kansas City's biggest party night in half a century we must remind readers.

I get that this blog is a debbie downer but c'mon. Let's people have some fun at least a couple of days. There is plenty of misery to spread for the rest of the year.

classic kc bait and switch. Win a super bowl, get a baseball stadium.

Pretty much the same thing happened with the royals. The crowds for the parade were mostly filled with tourists from around the metro but somehow that got translated to all of these phony tourism numbers. KC is always looking for the next big scam.

Probably one of the funniest comments we've seen on this blog in years.

And yet nobody really cares about the cities problems! Go Chiefs! Weird.


Lucas, being a mayor isn't about football and who wins what. Planning a parade isn't your job either. Get off of your lazy ass and get something done today. BTW is KC ready for the crowd unlike when the Royals won KC was a disaster. You know kinda like those 25 million tourists that go through our city, and what about the streets are tourists coming for the parade going to go home and say what a crap hole KC is because of our streets. Lucas you didn't plan for this did you? You have sat around doing nothing and now look. KC doesn't look good for people to see, aren't you embarrassed? You should be. You're a huge LOSER!

^^^OK Boomer. Q, the Chiefs, and all the young are winners today. Only geezer bitches like you are bitter. Please go into the light!

It's ok, I know there isn't anything to back up this 3 a.m. troll. But your supporting evidence is where, again? In a tree? Under a rock? Or is this just another random thought without any evidence to support it?

6:18 but they aren't winners. The taxpayers will be ripped off for more projects. The shootings continue. Weird.

Scary picture. The mayor is spreading the cornhole virus.

7:49 you probably got it when you took it in the ads last night.

How much did it cost the taxpayers for this trip? Smiley selfies Lucas is all about himself, does he know he’s supposed to be laying track and not dancing around like a bunch of Kansas City faggots.

I finally figured out what the problem is with most of you people. It is perfectly described in this link above.
You are pissed off because people are going about their lives, doing what they want, and there’s nothing you can do about it, and none of it is about you.

Narcissists, psychopaths and sadists: Pretty much describes Tony and everyone of you Internet blog Kool-Aid drinkers.

F__K you Kerouac. Go ahead and jump on the Chiefs bandwagon.

Get ready for a post hole auger going up your ass at Arrowhead. Parking will be triple digits, all ticket packages will skyrocket. Red shirts with hearts everywhere.

Ha! Great night in America last night! Chies dominate, Trump self-owns, and TKC's diaper squad crying like the babies they are and have always been!

8:05 Or, maybe they just want to hear the unvarnished truth about what is going on in this town. It's not like you will EVAR get anything but the liberal agenda and handed down talking points from our "Group Think" rulers anywhere else.

Sure, it's a tough room, but if you need a "Kansas City Star Safe Place", no one is stopping you from going back over there and jumping right into a swimming pool full of lies and bullshit.

Dont go, you broke-ass bitch. We wont miss you!

“Civic pride” ok, how about Lucas showing some “civic pride” and fix the damn streets

Most law breakers are unemployed, plenty of jobs out there. Not a good excuse anymore.

Ahh look at Smiling Selfies Lucas. Let me guess he thinks he won something? How much did it cost us for his little pleasure outing to Miami?

^^More than you make in a year grampy.

Let's have about 30 days of gladiator games at Arrowhead. Bring in some lions, bears, chariots, Amazon women, Nubian warriors, and let them fight it out with the Gladiators. This will take the minds of the citizens off the crumbling infrastructure, crime, pay inequality (why should FOOTBALL players make millions? They should play for $15 an hour, just for the love of the game), and other problems of society. Bloody gladiator games will make the emperor popular.

Lucas makes more then us yet we are the ones paying salary? Weird.

^^^^Deal with it. You are responsible for your shitty station in life, no one else!

^^OK Boomer. The Price is Right is on. Go away.

No, the Price is Right is not on because of the dummocrats and their impeachment sham. Trump 2020.

^^^OK Boomer. Try to lead a meaningful life then. Loser.

Sociology Paper of the day: https://economics.mit.edu/files/15100

Tom Brady is coming back and going to whip your redneck asses next year. This time next year, Tommy will have 7 rings to Patty Cakes one ring!!!

Let Squintward have his fun. It may be another 50 years until the next Super Bowl win and Bouncy will still be rubbing her crotch at the half time show.

^^Why are old people so dumb? Ugh. This is soooo lame.

Wondered how long it would take for this picture of Mayor Selfie would show up. Just to bad the trophy he holds stands for more than he ever will be.

12:31 does the name Bret Saberhagen ring a bell? Remember when you fools bought into his greatness? one and done is what it got you. And the Chiefs one and done record speaks volumes for itself.

^^are you retarded or stupor dave?

Who paid for the Mayor's tickets and travel expenses?

^^You did that's who

Tommy Brady owns the Chiefs in the playoffs. Next year Patty Cakes will be sitting on his Nebraska Furniture faux leather couch watching Tommy hoist Lombardi #7.

Patty Cakes will break the Chiefs salary cap, and the Chefs become the Carolina Panthers. Tommy Brady was a team player and received 50% of his market value to provide cap space for the greatest franchise of all time. .

^^^Thats incredible boomer! Chiefs are the champs though so...