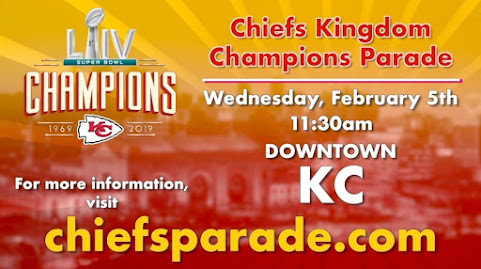 Local media has been politely ignoring the sordid topic of coin for tomorrow's big parade. Tragically, Kansas City taxpayers are on the hook for the party and the financial planning has been horrible.

Here's the word with legislative text to back it up:

"In all the hype to show all the deserved support for the Chiefs, no one has asked who is paying for the parade. When the Royals won, there was sufficient Funds in Neighborhood Tourism and Development Fund to help with the costs. Around 1/3 of the cost, $100k was applied to the reported $350k parade cost.

"Thanks to the previous Mayor and the Office of Creative and Cultural Services, that fund is wiped out at the end of this fiscal year. It was mostly a result of one event, Open Spaces, (We know what a disaster that was) but it is also a result of ignoring Resolution #130321 that established a reserve fund for events and occasions just like this. Less than two years ago there was a reserve fund of over 1 million dollars, where is it today?"

The insider is absolutely correct . . . The legislation of the text:

"That the Neighborhood Tourist Development Fund Committee is hereby requested to create five-year plans to identify large-scale events that may require more than $100,000.00 in NTDF funds to assist in planning for such large-scale events, while concurrently funding equally important “small-scale” local events."

THE ANSWER TO THE READER QUESTION: "WHO IS PAYING FOR THE EPIC CHIEFS SUPER BOWL PARADE???" IS TRAGICALLY SIMPLE: KANSAS CITY TAXPAYERS!!!

So bundle up, check the parade website for more deets . . . And take a look at the KCMO hype clip for tomorrow's festivities:

Open spaces, the gift that keeps on giving Kansas City a budget deficit.


Screw the NFL and screw the chiefs. They are nothing but low life people who attract low life people. Everyone who walks around with chiefs clothing on are dirty, fat and ugly. Real trashy drunks and the women are so hard core it's sickening. The half time show was anti american and vulgar. Everyone is laughing about it. So have your parade and go back to rubbing each others ass soi boys. Glad I'm not paying for these criminals party when they go home and beat their kids and wives.

The Mayor can get out their like the Salvation Army and beg for the money.

Smiley selfies Lucas said on tv that security was costing them 2 million a day, this does not compute with the several hundred thousand they’re saying it’s gonna cost...... somebody is lying, big time

10:08 and Jeffrey Epstein didn’t kill himself.

And the fact that this town can’t seem to handle anything as big as winning the Super Bowl without turning into a bunch of reckless idiots.

Unfortunately KCMO can't find a way to leverage the win into a financial gain. Miami walked away with $400 million and KCMO will walk away with a $2.5 million invoice. The police and fire will walk away with more unfunded overtime and rides to and from Price Chopper in the trucks.

Goddamn your readers ask some stupid questions with obvious answers.

Unless NOBODY ASKED this. And this is just another post taking cheap unwarranted shots at the city. My money's on the latter.

^^^ yeah, because KC is in such great financial health as evidenced by all of our potholes. Please pull your head out if you think 12th & Oak is running a sound financial operation. My bet is your angry about some of your own issues. Please resolve them and stop defending a local government that gives away millions to corporations but can't look out for its residents.

And yet, Crigger the Incompetent is still here and earning well into six figures. Go figure.

And a 49'ers fan has spoken. Catch the next flight back to the left coast you loser.

Except, and this is real key here you bunch of retards, the NFL is paying for it! This is why the parade has to be today and not tomorrow when the weather will be better! As long as the winning team throws the parade within 73 hours of the Super Bowl, the NFL will pay for it! I mean this information is out there, so why are you printing this Tony? The MLB did the same thing for the ROyals. The paid KC $350,000 for their parade. So calm down idiots. Jesus, the trolling on this site knows no limits.

Oh, go ahead and have a good time! It will be another 50 years before it happens again. Assuming KC doesnt get nuked by some Muslim fanatic.

Nothing at all new here.
The one per-centers roll over the KCMO electeds every day and the taxpayer pick up the tab.
Special interest "activists" like the transit or bicycle crowds.
Developers and their attorneys.
Out-of-town consultants.
Urban futurists with BIG BIG ideas.
The list goes on and on.
Why would anyone think that professional sports teams, hose stadiums are funded by the taxpayers, would be any different?
So the downtown hotels, all of which are owned by large out-of-town corporations will increase their occupancies and the bars will have a big day with all the millenial drunks.
And everyone and anyone who can somehow cash in or try to get personal publicity, especially the local politicos, will continue to mug for the cameras.
Back to reality on Thursday.

NFL absolutely does not pay for parades

Now we know the weird guy is a liar.

^^^You're just figuring that out?

The NFL does not pay for the parade. Never have and never will. The city pays for it unless the Chiefs organization has agreed to pay part of the cost. The Chiefs should have to shoulder 100% of the costs since it's their team if they were the ones wanting the parade. To me it's who ever wants the parade is who is going to pick up the tab. So you, me and all others who pay taxes in Kansas City MO are the ones hosting a party than will be more than 75% I'm betting of people from out of town.

No, they will take it out of the school fund. Then next year they will raise your taxes again. Remember it's for the schools.

What happened to the open container law ? Any body else would be in jail! Just goes to show the mentally of this city. Above the law.

I think the Hunt family should foot the bill on this one. They make enough off the games! Maybe they should of had the parade at the stadium! Then they can deal with the mess and all the idiots.

but stupid dave you don't live in KC so you don't pay shit!!! You don't work in KC either, so shut your lying mouth! Again stay out of our affairs!!!!

At least Jimmy G is hot af. The Chiefs players either resemble thugs or mutants.

Be prepared. Season ticket prices will increase. Why not when most of Hard Rock was a sea of red and those folks paid s minimum of $5k/ticket.

That whole tourism fund has been messy since Crigger took over.

As someone who knows the truth, as did others in the "upper room" who escaped across the street..you don't know the half of it. BUT YOU WILL! Go ahead and name that street!

But it does pay for loans to KC CREATES...a/k/a fiscal agent for Open Spaces. And where's that contractual obligation called a 90 day report? Can you say "BREACH OF CONTRACT"!??