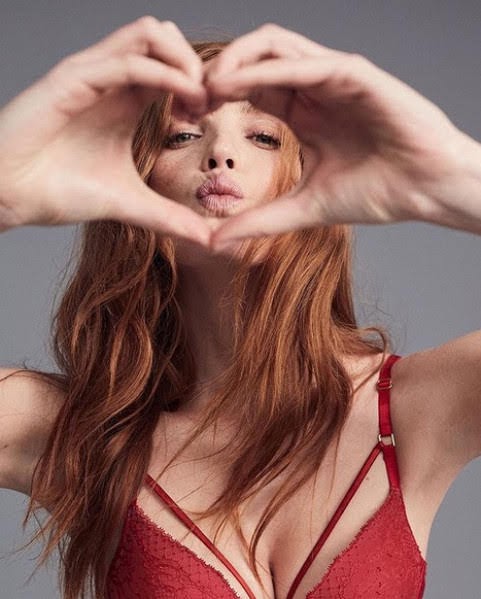 Inspired by hottie Lexi we take a look at pop culture, community news and news from across the nation and around the world we wanted to share . . .


Man rescued from back of commercial trash truck

KANSAS CITY, Mo. - A man is recovering in an area hospital after being dumped into a commercial trash truck early Friday morning. Emergency crews were called to the truck at roughly 6:30 a.m. Friday on reports that a person was inside.

The KC Pet Project is rejoicing in their favorite sight after the Super Bowl - empty kennels.Kansas City Chiefs defensive tackle Derrick Nnadi sponsored the adoptions of all dogs available in the shelter on or before Super Bowl Sunday to celebrate the team's big win.Every dog in the shelter at that time was available for adoption for free.

KANSAS CITY, Mo. -- When everyone's eyes and cameras were focused on the police chase before the Chiefs parade, they might have missed the crowd's reaction. The panic that ensued caused at least one metro family to miss Wednesday's celebration.

Newhouse is Kansas City's oldest domestic violence shelter. It has gone decades without renovations or repairs.The shelter has launched a fundraising campaign called Have a Heart. Some of the shelter's 24 rooms are in need of renovation.

Panty Protest In A Bunch

The alleged shooter who opened fire at a Walmart in El Paso, Texas, in August, killing 22 people and injuring 24 others, was charged with federal hate crimes on Thursday, according to senior law enforcement officials. Patrick Crusius, 21, of Allen, Texas, allegedly gunned down the busy store on Aug.

The death of a Chinese whistleblower doctor who was punished for trying to warn about the coronavirus has triggered a national backlash over freedom of speech and censorship that has overwhelmed official online attempts to contain or remove the expressions of anger.

Democratic House impeachment managers believe President Donald Trump has not learned anything from his recently concluded impeachment trial and will likely continue the same behavior while in office, they told CNN in an exclusive interview.


Mike Bloomberg Is Paying 'Influencers' to Make Him Seem Cool

One day after the Iowa caucuses were effectively botched by the disastrous rollout of a new vote-counting app, billionaire Mike Bloomberg announced that he intended to capitalize on chaos in the Hawkeye State by doubling the advertising budget of his presidential campaign.

KANSAS CITY, MO (AP) -- A Kansas City Chiefs fan said he took a "professional NFL hit" when he slammed into a parking meter while trying to catch a pass from quarterback Patrick Mahomes during the team's Super Bowl victory parade.

ROB: NEXT WEEK, MORE THAN 150 COMPANIES AND GOVERNMENT AGENCIES WILL BE LOOKING TO HIRE VETERANS, AT THE GREATER KANSAS CITY VETERANS CAREER FAIR. JOINING ME THIS MORNING IS MATT MACIEL. THANK YOU FOR YOUR SERVICE. MATT: THANK YOU. ROB: TELL US HOW THIS ALL GOT STARTED.


Warming up by the weekend

Fight for your right to panty?


You know it makes me sick that these chief low life idiots can make a contribution and that makes everything OK. The haven't been punished for what other people got punished for during the failed parade. Are they above the law? Apparently they are and that's sickening! They kneel but they give to dogs and cats! Imagine that!!!!! I thought you wanted to help black folks for suppression! LIARS!
My take on this crap is black people get by with or ruin everything, but they insist on living in a white neighborhood. Patrick Mahomes GO BACK TO TX we don't want you here. Look up his address it's published and tell him to get out and take his skanky girlfriend with him along with the other people who were so ungrateful to the fans.

This is the real facts Ma'am said...

Saya a lot about your police force when Grandma gets hurt at a parade because your local PD can't even properly get streets blocked off. She only got hurt after the cops crashed the meth head beside a crowd of people then the Chief gloats about the awesome job his idiots did.

Newhouse shelter used to be good but has been taken over by a renegade CEO and board chair.

@12:15-Sorry shitbird. You need to get the facts straight. The car never came close to the barricades dolt. The woman got hurt when she jumped up and fell flat on her face on the concrete! She's morbidly obese and couldn't move. She wa never in any real danger and now just wants something from the Chiefs for her troubles. You need to get the facts before you ever comment on here again idiot!

@11:21-calm down grampy. More people want mahomes here than they want you here. He provides value, you provide nothing. He's better than you, smarter than you, younger than you, richer than you, and able to beat your punk-ass with one had tied behind his back. Don't forget that! Now take your smelly ass into the day room, you're past due for a diaper change. You smell like shit!

1:14 stop being an ass. If the popo had done their job she wouldn't have been hurt. It caused a panic in the crowd as was plain to see why. You must be a butthurt cop!

^^wrong shitheel. I was there. You weren't! Nobody panicked dickweed! She jumped up to watch the commotion and busted her ass! End of story. Now fuck off and don't come back!

^^You didn't see a damn thing, lots of video out there showing people running from the area where the car came to a stop on both sides of the street. Oh and explain this you jerk.
A mom from St. Joseph, whose son’s Nintendo was trampled at the Chiefs Kingdom Champions Parade, is thanking a group of police officers for their kind gesture.

Amanda Brown, her mom and two children were about 30 feet away from where the police chase ended after a suspect drove through barriers and down the parade route on Wednesday.

“Honestly, I was just in shock, like is this really going to happen?” Brown said.

Her son, Bentley, had been playing his Nintendo Switch that morning to try and pass the time. The gaming device was destroyed as fans ran from the scene of the crash.

Brown found her son’s device a short time later. The controller was completely gone, a switch broken and the screen partially damaged.

“I said, ‘Hey bud, your switch got broken, but don’t worry about it. We will fix it. It just matters that we’re all safe,’” she recalled.

As the 9-year-old sat crouched with his head in his hands and tears on his face, Brown said four police officers from the Kansas City Police Department came up to them.

“They said, ‘Hey where’s the little boy with the Switch?’ and so I stepped forward and acknowledged them and said, ‘He’s right here but he’s fine.’”

The officers could sense the boy was hurt that his game had been crushed and gave him money to replace it.

Oh Chimpy. Looks like the comments below crushed your little monkey skull! Slink off now. Lol

2:22 scroll up and read the story and watch the video liar.