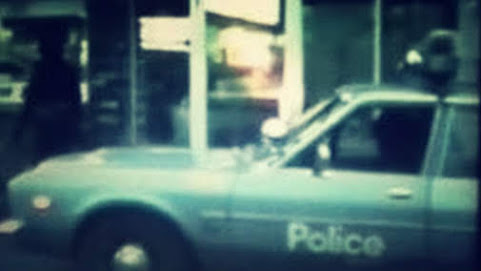 In this update, along with a quick shot of an old school KCPD crusier, we collect relevant information from across the metro on police action, court cases and all manner of ALLEGED misdeeds.

Two people are facing animal cruelty charges after more than 260 animals were pulled from a filthy home in Kansas City Monday. City officials said Mikabel Montero and Natasha Marie Acosta have each face three animal cruelty charges in municipal court -- specifically one count control of odors due to the smell emanating from the home, and two counts of inadequate animal care for lack of clean, fresh water and unsanitary conditions.

KANSAS CITY, MO (AP) -- A convicted felon who was wounded in a Kansas City shootout has pleaded guilty to a federal firearms charge. The U.S. attorney's office said in a news release Tuesday that 26-year-old Malliek Haynes proclaimed that he was a "gangster" during an April 2017 altercation with a group of people at a store and then repeatedly lifted up his shirt to show the .40-caliber pistol in his waistband.

Authorities say a Kansas Highway Patrol trooper found nearly $350,000 of suspected drug money hidden in the gas tank of a pickup truck after pulling over the driver on Interstate 70. The Wichita Eagle reports that federal prosecutors filed a civil asset forfeiture case Tuesday, asking a judge to give the money to the government.

JEFFERSON CITY, Mo. - The state of Missouri no longer would face financial punishment for wrongdoing in some civil lawsuits under a Missouri bill. State senators debated the proposal Tuesday. The legislation would mean the Missouri government couldn't be penalized with what are called punitive damages.

LAWRENCE, Kan. (AP) - Lawrence officials are looking into changing or possibly repealing ordinances that make it illegal to camp or sleep on public land, in city parks and in downtown Lawrence. The Lawrence Journal-World reports that city commissioners discussed the issue Tuesday amid an increased focus on the homeless population after the city's shelter sharply reduced its capacity last year.

JEFFERSON CITY, Mo. -- There's a push by some Missouri lawmakers to expand voting rights to felons on parole. They say the legislation could bring in tens of thousands of new voters. Current Missouri law allows felons to vote once they complete their probation or parole as long as they haven't committed an election crime.

FREDONIA, KS (KCTV) -- Larry Burgess has no criminal record. He's a cancer survivor who suffers from seizure disorder. He tried prescription drugs. A cocktail of 23 pills a day didn't cut it. "No seizure medication helped. In fact, my seizures got progressively worse over time. It was terrible. Terrible.

SUGAR CREEK, MO (KCTV) - A sign that said, "this drug house, closed for business," has since been taken down. Sugar Creek Police and the Jackson County Sheriff's Office placed a notice after serving a drug warrant. KCTV5 News is asking police why the sign was necessary in the first place, so far they're not commenting, as charges haven't been filed.

TOPEKA, Kansas - Wendy Couser, a former juvenile intake officer at the Newton Police Department, has always believed in the importance of consequences. But Couser feels that she's yet to see consequences for the law enforcement officials who beat, shot and killed her son, William "Matthew" Holmes, during an arrest in August 2017.

KANSAS CITY, Mo. - A Missouri State Highway Patrol trooper is uninjured after their vehicle was struck in a hit-and-run incident. The crash happened shortly before 11:30 p.m. Wednesday on northbound Interstate 35. A trooper was pulled over to help a motorist in Harrison County near Ridgeway when a tractor-trailer struck the trooper's vehicle.

Tragedy Aftermath & Waiting For Justice Across The Bridge

More than two years after their son's death, a Northland family is hoping for justice. 17-year-old Jake Wehmeyer was killed in June of 2017. On Thursday, February 13th, the suspect, who was his friend, will be sentenced.

Those wandering into a KC coffee shop on a Saturday morning might expect to hear sleepy chatter about Netflix shows, brunch plans, or wild Friday nights-not an impassioned discussion about criminal justice, race, and violence. Then again, it's clear community organizers Justice Gatson and Tiara Moore aim to do something unexpected.

But I thought Trump was going to end crime?

I thought the house dummies were going to impeach him.

They did; he didn't.

^^and yet he promised to end it on day one of his administration. Why did he lie then?

^^ you mean why have the efforts he has made not worked? You want the old guy on here who constantly complains about the negros to tell you why or you got something?

12:13 how many crime task forces does the government need to make before the complaints about militarization of the police start? Or do you want to talk more about the failing school systems or ......?

how about the depressed midwest economy and how it did not rebound well after wallstreet was bailed out and how the midwest real estate market is now a bonanza for out of state investors facilitated by the wisdom of the city council?

why did he lie then? Why do you sound like a fucking 4 year old?

What resource sector of the midwest has not been targeted?

12:13 more and more you sound like a worthless tax paid by democrats social media dolt.

"Americans are increasingly concentrating in a few metropolitan areas — by 2040, 70 percent of Americans will live in 15 states. The regions surrounding America’s family farms may become the country’s next ghost towns. “We have to think about what we really want rural America to look like,” says Jim Goodman, president of the National Family Farm Coalition. “Do we want it to be abandoned small towns and farmers who can’t make a living, and a lot of really big farms that are polluting the groundwater?” (Large farms, which have more animal waste to deal with because of their size, have been found to pollute groundwater and air.)" https://time.com/5736789/small-american-farmers-debt-crisis-extinction/

You think KC is going to survive that with their robust ingenuity? Or are you all just going to get plundered until you don't.

Maybe the chunky crumbs given to JE Dunn will prop the whole city up.