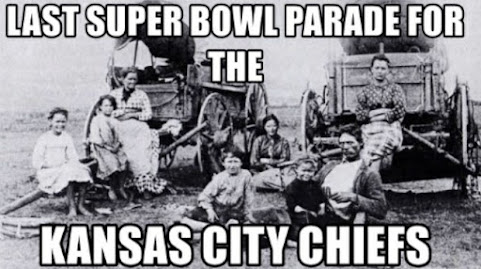 Local authorities prepare for the best and worst whilst playing the part of Paul Rudd.

The Kansas City Police Department doesn't want to jinx it, but preparations for a victory parade are already well-underway.It's something Kansas City has seen only once when the team led by Super Bowl IV MVP and Hall of Famer Len Dawson beat the heavily favored Minnesota Vikings in 1970.Kansas City

If the City and the Police didn't start planning ahead and time, and rushed to put a plan together at the last minute - and something went wrong, you would be the first to criticize for the City and police being "negligent", "shame", "failure", "poor planning", "mismanagement", "someone at city hall needs to be held accountable", "heads need to roll".

^^^ Please call a doctor and tell him your sense of humor has been missing since 1971.

Makes no matter how much planning they will do some black person with a gun will ruin it all. Besides who wants a parade here so the whole world can see what Shitty City is really like.

Mayor Q was featured on ESPN. Next up, a run for Congress?


Calm down everyone the Chiefs probably won't win, but if they do it's only for a few hours so the hard core drunks, their whoreish wife's and bastard kids can celebrate. Stay home a deal with it you're so much better than they are. Oh and if they lose they will just go home and beat their wives and kids.

^^What's a matter pops? Nobody to watch the game with?? Got no friends who are having a party?? Don't worry, as a public service, Tony will keep this blog open during the game for all the bitter, busted, broken, pants-shitters like you to commiserate your failures as human beings. That way, you're not out in public fucking up everybody else's good time!

We should have two parades, one where whitey can have a safe and fun environment free of kneegrows and the other for koloreds only down prospect ave

And all for naught... because they will lose.

^^and yet they will win, and win bigly. Weird.

That's cool then your fat wife can have a parade on my big black dick!!?

You know somebody gon act da foo at da parade.

Better get to greasing the lightpoles like they do in Philly.