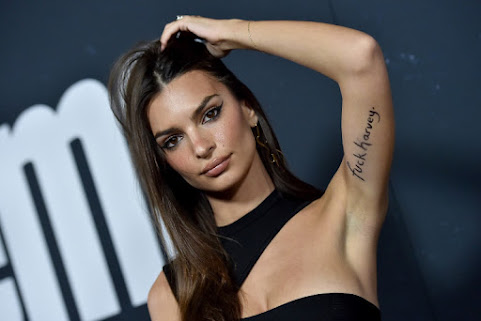 For this evening we feature a glimpse at hottie Emrata pushing back against an old school movie mogul, local community news links and a few national items which have caught our eye . . .

Rashida Phillips, a St. Louis native who has worked with a range of cultural organizations, has been named the new executive director of the American Jazz Museum. She is also a jazz singer. In a letter, the museum's board of directors said that "after a thorough and thoughtful" national search process, Phillips "rose to the top" of the field of more than 25 candidates.

NEW YORK (Reuters) - Major League Baseball (MLB) will remove marijuana from its list of banned substances and players who test positive for opioids, fentanyl, cocaine and synthetic THC under random drug tests will be referred for treatment before being disciplined, the league's updated drug policy announced on Thursday.

A new poll of registered Democrats has Hillary Clinton as their top choice for the 2020 Democratic Party presidential nomination - and she's not even running. The online Harris Poll survey released by the Center for American Political Studies at Harvard found that Clinton placed first with 21% of the vote, followed closely by former Vice President Joe Biden at 20%, Sen.

Emily Ratajkowski was so outraged by the Harvey Weinstein settlement- it emerged Wednesday that the disgraced producer's insurance companies will pay out about $25 million in civil suits to around 30 accusers, and that Weisntein himself won't have to contribute a penny-that she wrote "Fuck Harvey" on her arm.


Don't underestimate the power of a handwritten card

"Consumers of all ages much prefer a handwritten card versus a text with the exact same message," said psychiatrist Dr. Vania Manipod.

KANSAS CITY, MO (KCTV) -- Rockhurst High School announced Thursday that they have hired Kelly Donohoe as their new head football coach. Donohoe will start his new role in July. He served as the head football coach at Blue Springs High School since 2000. He will succeed Tony Severino who led the program since 1983.

Winter On The Way


Highs in the low 50s Friday

A weak cool front will be pushing in from the north and west keeping our temperatures in the middle 30s to start Friday. The afternoon high will climb into the low 50s. With the front we could squeeze out a brief shower in the afternoon.That lingers into Saturday, with a chance of it mixing with a few snowflakes.

Harvey made more careers than he ruined! Some respect is due. But most people don't know this whole thing is just a media takeover game played on the stupid public.

I am sure that the bitch did fuck Harvey.