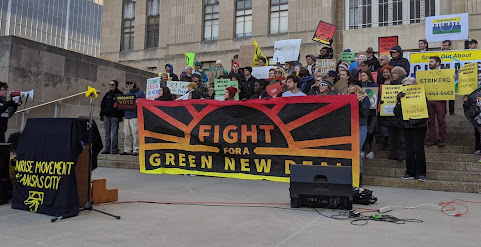 Here's the mission statement for the progressive Friday walkout protest across the metro . . .

Young people put their lives on hold to launch their version of a Green New Deal for Kansas City at City Hall with KCMO Councilman Eric Bunch, then they sat-in at Rep. Sharice Davids’ office to demand she back a federal one, too

If passed, KC would be one of the first major cities in the Midwest to adopt a Green New Deal

Kansas City, Missouri -- Over 100 young people from all across the metro area walked out of classrooms and workplaces today to demand the Kansas City Council immediately adopt a Green New Deal resolution for Kansas City. The strike was part of an increasing global call for climate action amongst young people, which has shaped the conversation in the 2020 elections. Led by Sunrise Movement KC, a local climate activist organization, students began rallying at City Hall at 12:00pm where they launched their Green New Deal for Kansas City resolution with KCMO District 4 City Councilman Eric Bunch, who proceeded to introduce the resolution to the Council that day.

The Green New Deal resolution calls for a 10-year plan to transition Kansas City’s economy to net-zero carbon emissions by 2030 while providing good jobs in the process. If passed, it would make Kansas City one of the first major cities in the Midwest to adopt a Green New Deal, ahead of larger cities like Chicago. Though Kansas City has a Climate Protection Plan, young people with Sunrise Movement KC argue that it does not take the scale or urgency of the crisis seriously enough.

More of the local news has ignored it but here's a nice write-up for worker bees almost out of the door . . .

- A progressive contender and vet who recently moved to Kansas City @MaiteSalazar4MO "We, like my opponent @repcleaver, deserve the right to age gracefully, to know that we will grow old, and that our children will grow old, and their children after that." Congressman Cleaver does not support the #GreenNewDeal."

- From otherwise absent Council Dude & Bike/Walk Lover Eric Bunch: "Yesterday we adopted a resolution to move to fare free transit. Today I announced my sponsorship of a Green New Deal resolution. Love that we are making big moves on equity, transportation, and climate."

- Progressive Vs. Progressive Pushback: Sunrise Kansas City and high school students from Johnson County will (ATTEMPT TO) take over and occupy the Overland Park office of Democratic Congresswoman Sharice Davids (KS-5) to demand that she support a federal Green New Deal or step aside for someone who will.

WILL THESE NEXTGEN KANSAS CITY PROTESTERS SAVE THE WORLD BY WAY OF THE GREEN NEW DEAL?!?!

Good for them. They planned their protest for the worst part of the news cycle. I'm sure they'll be able to plan entire industries just as well!

I believe they will win.

Would rather have my councilman do something about the hordes of homeless who are now assaulting people in Downtown KC.

That might not make the world safer but it sure would save KC a lot of dangerous situations and calls to the police.

The resolution is non biding and has no legal enforcement option. It's a nice letter.

^^^^^ Shhh. Don't tell them. They'll be back on the coasts for the holidays their parents celebrate. Just act like they won!

Don't be a hater. They are doing the right thing and deserve at least a little bit of respect for not sititng around playing video games!

City hall isn’t that stupid to buy into this nonsense......

They didn't put "their lifes on hold" because they don't have lives yet. If they did, they wouldn't have time for this nonsense.

So they are protesting rather then actually rolling up the sleeves and producing something of value.

I suggest raising property taxes to pay for this!

My idiot kids went to this. Little do they know I'm blowing their inheritance bwahaha.

Councilman Eric The Great Bunch couldn't even figure out how to register his kids in the KSPS's crap computer system the other day.

Green Deal! Times running out! I support it! Okay and now I'm going home and ordering a bunch of stuff from Amazon. New Phone too!

The THIRD WORLD WAR, which will start in the middle east, will destroy most of the Northern hemisphere and make "climate change" a joke. Nuclear Winter, anyone?

The green new deal would catch on better around here if we had more idiot faggots. Eric Bunch can’t do it all by himself.

How are they paying for these nude green eels?

Why don't they march east of troost and start cleaning up the neighborhoods? That actually would help the environment and give back to the community.

Also, most people at this rally are paid to be there and get paid $15 an hour as you can easily see in the craigslist ads

Green? Really? You know how much pollution is caused by professional sports events, from car fumes, to trash, to chemicals used to maintain facilities, to hydrocarbons created to power lights, mow playing fields etc. Example: 50,000 people driving 10 miles each to reach the Chiefs stadium is equal to 500,000 miles driven. Not including buses. If you change your car's oil every 4.000 miles - each game equals a lot of oil changes and dirty oil! FOR EACH GAME. So eliminate sports if your really Green. Tell the felons playing football to get a day job commensurate with their education level. People are not serious about green. Their dainty efforts wont make a small difference compared to the pollution generated by their gaming "kingdoms".

They win, you lose!


Sharice Davids has no right to tell anyone to step aside as a matter of fact she needs to get the hell out of our city. She has come here and paraded around telling everyone she wants to kill us. She's crazy and should be watched. She has a daddy issue and wants to take it out on the American people. BTW stop using little kids like Greta to push your scare tactics. The progressive liberals are the worse offenders of polluting the climate. Take a look at the aftermath of their protests. Trash even furniture everywhere left, and guess who has been cleaning it up????? That's right CONSERVATIVES! So Sharice I hope I run into you some day Stupid BITCH!

You read that wrong dumb ass trumper. Sharice doesn't support the green new deal. They are telling her that she should step aside. Are you just some kind of dumbass begging for attention? Go retake the GED please.

The crew at 12th and Oak been making new deals that hands out lots of green to folks for years.

This planet will be here another thirty thousand years, There has always been climate change. They should be more concerned about there communities. That will be the first to be Destroyed .LOOK AT DETROIT AND L.A. And SAN FRANCISCO. SAVE,THE METRO. GOLDEN COUNTRY YOUR FACE IS SO RED WITH ALL OF YOUR Corporate Welfare, your poor can be fead,

Science says the sun will expand greatly someday and envelop the earth, charring it into a much smaller molten ball of elements like a metal/earth mixture. Anything man has made will be gone. It will be a molten liquid sphere. There is no exact timeline. However it is a fact it will occur. So just try and "save the planet". Good luck.

@7:21pm Oh go soak your feet, also it sounds like you need to cut down on them cigars!

@3:43 Keep quite and try and learn something.

Actually the earth was never self-sustaining. The 2nd law of thermodynamics is proof the world has been degrading since its beginning. It doesn't matter what we do. It will end up a lifeless wasteland. The sun will envelop it someday and it may be hit by several large comets or asteroids by then. The earth is doomed. Even the Bible predicts the seas would be poisoned, fish will die, extinctions will happens, huge numbers of people will die of illnesses, areas would get no rain and the earth would warm up to the point of being miserable. And the Bible was written thousands of years ago when people thought the earth was dust on the back of an elephant (its true). What we can do is outlaw smoking and vaping, execute drug dealers, change all life sentences to executions and spend the money and food from prisoners on the poor. But the earth is doomed.

More comments hete than participating protesters. Cry babies think the earth is static. Where does this stupidity originate ? A static mind ?

When will they outlaw newspapers on driveways?
That’s not very green.
Dead trees. Fossil fuels in older cars delivering. All the machinery and papers and electricity to deliver a hard copy of what can be delivered from a small carbon footprint online.
Call AOC today and demand the green new deal outlaws newspapers in driveways!

I'm going to send Eric Bunch a pair of reading glasses and a copy of the city budget.

People: leaded gasoline from cars, trucks, airplanes and other vehicles has covered the entire USA with a thin layer of deadly lead. It was carried by winds and the jet stream all over the country. Lead is very toxic for thousands of years. There is no "green". "Green" was in the 1800's before leaded gas was made. People wonder why autism and cancer has skyrocketed? Then the USA tests nuclear weapons above ground in the southwest - and the fallout spread. Forget green. Buy insurance that covers cancers.