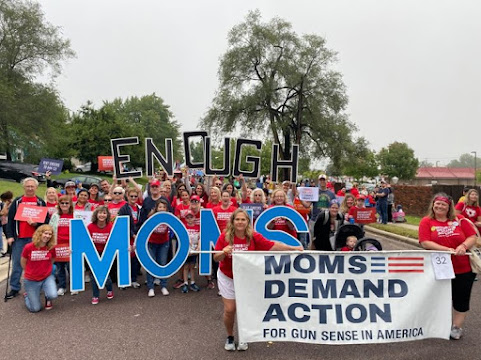 EPIC turnout for these JoCo activists reveal the changing political tides in this suburban enclave and the RISE OF SUBURBAN HOUSEWIVES as the dominant political force in the Golden Ghetto.

Good for them! They're doing the right thing!

Getting outside and exercising off all that excess weight is a very good thing! Lol!

Being an activist is more than just buying one of the matching t-shirts. Nice activity to cool down from yoga or Pilates.

All blisters have a head.

When they march down College Avenue at 2:30am it might be possible to take them more seriously.
Most of them haven't been north of 95th Street in OP in years.
Clueless white hand-wringing do-gooders.
Another day, another protest.
What's on tap for tomorrow?
Good for the cardboard and Magic Marker companies.

Lots of excess weight in that herd.

March down Prospect on Friday or Saturday night.

^^^^^ good suggestion. That's where the real gun violence is.

Here's what's funny. You guys talk a big game but wouldn't dare mention a peep to your wife because she's slap you around and tell you to shut up. Face it boys, the women have the power now in Joco.

Not much diversity. Very white.

These "Moms" don't have that kind of access, or money.


Believe me, it's all about money.

They can help by NOT having kids. KIDS are the basic problem. So no kids, no gun problemd

Poor bLIEron, you just don’t get it do you! Hahahahaha!

Do you actually read your own posts? Because if you did you’d realize how crazy you are. Sad.

Condescending, brain dead white women who voted for Obama and now want your guns in the trash and your balls on the refrigerator, at home, when ever you leave the house.

Import Asian and Latino chicks, cause these overbearing, harridans are sporting the IQ's of nasal mites and the attitude of a junk yard dog.

The "Sandy Hook shooting" was a planned, staged crisis drill.

No one died at this event.

The Sandy Hook elementary school had been closed long before this exercise was staged.

Newtown CT is a well-known "intelligence community" where many residents are veteran employees of the intelligence services.

Once you start looking at the facts surrounding Sandy Hook, it's clear that a drill was being run that day, but the national media purposely reported it as real-life. Part of the ongoing aggressive campaign to nullify the 2nd Amendment to the U.S. Constitution.

They have succeeded. I can't think of any recent shootings being done by white people in Johnson County.

I wonder who they will blame once law abiding citizens hand in their firearms and the fang bangers continue to kill each other in record numbers.

How convenient, to be able to virtue signal without having to leave your neighborhood. But to have any effect, the not all that concerned Moms should be marching down, say, Benton Boulevard, from 27th street south to about 63rd. After all, that's much closer to where most of the gun violence occurs.

Perhaps if these "moms" would stay home rather than work and raise their own children they wouldn't go looking for daddy's guns. Perhaps if they didn't allow low paid uneducated women to raise their children in home and corporate day care centers the kids would play outside and have fun and be normal. Perhaps if these moms would actually talk to their children and get involved in being a room mother in the kids elementary school the kids would grow up with mommy values seeing mom doing something for them. How about if mommy would put a hot fresh home prepared meal on the table every night and have every family member eat together and share what happened in their day the kids would be kind and thoughtful. Perhaps if the family would go to church once in a while there would be moral values in the home.
I guess the thing is that mom forgot that her primary goal is to raise and support her children but wee got away from that in the 1970's. So who is to blame? Marches and candle vigils won't change anything.


You Moms and idiots like Bryon rag head Funkhouser are the problem.

@ 9:16 - You forgot - If moms would not push kids into competitive sports instead of non-competitive and not give them trophy's and medals for participation the kids would discover what they really want to be in life. Not let lives be dictated by when is practice. Then they could find their way in life to be productive and caring humans that care for kids, women, men, the truth about gender identity and just be really good people in general...we seem to be running short of those. And not every kid has to go to college but would be happy being a mechanic or trucker or a carpenter or plumber or electrician or something else we all occasionally, sometimes daily, need. There are many avenues that steer kids to good lives without guns and violence and hate. God Bless the women and men that put their children and family first.

No one's talking about this but most of those women aren't from Overland Park. They're from the other side of the state line and other cities in the metro. They don't represent Overland Park but they make it seem like they do

Moms teach your kids to respect the law

How about raising money to put armed security in schools?

Well about all you can say is those jayhawkers are as well fed as they are DUMB!