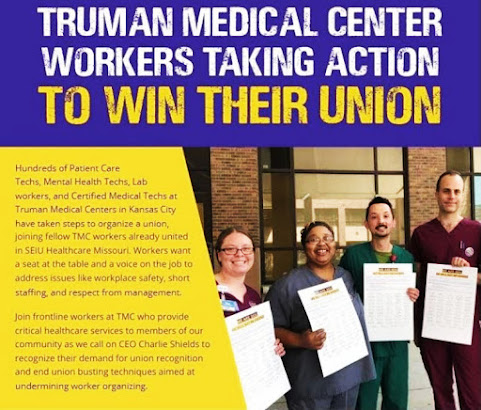 “Now, these values are at stake as hundreds of workers at Truman Medical Center who are organizing for their union are being met with hostility, harassment and retaliation. As lab workers and technicians at Truman are fighting for their place at the table, they are being targeted for speaking out. They are being ignored by management while on the job, and they are constantly in fear of losing their jobs for exercising their federally-protected right to organize a union.

“Not only are Truman’s anti-union tactics disappointing — they could also violate federal labor law that protects workers from illegal retaliation. That’s why those lab workers and techs recently filed an unfair labor practice charge against the hospital.”

wish them luck. They should actually be protesting city hall if they're serious about getting benefits. The health levy is a big part of it.

Feel sorry for anybody who has to go to this last chance hospital. I guess the workers also.

We'll of course. After all it is the leaders who set the course, assume all the risk, and sign the/your paychecks. What is so difficult about that to understand?

Why should we raise your pay for a piddly run of the mill job like taking care of patients?