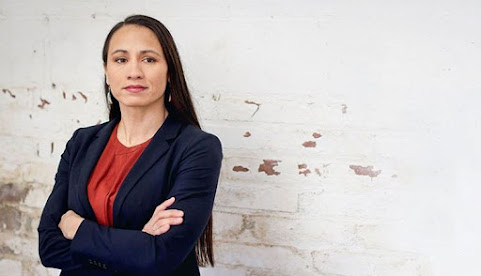 Credit where it's due, the Kansas N00B Congresslady might not be a member of "the Squad" but she is at the forefront of the current Democratic Party push to confront Prez Trump head-on in the same manner of no-holds-barred rhetoric . . .

THANKS TO TKC TIPSTERS WE'VE INTERCEPTED THIS SURVEY SENT FROM THE OFFICE OF REP. SHARICE DAVIDS!!!

She seems open to opinions from her constituents but also very strident in her views on guns.

From The Office Of Rep. Sharice Davids:

Like so many Kansans right now, I’m heartbroken. In less than 24 hours, our country experienced two horrific mass shootings in Ohio and Texas. My thoughts are with the victims and families whose lives were taken far too soon.

But this isn’t the first time we’ve woken up to this reality. Enough is enough. We can, and must, do more to end our gun violence epidemic and prevent future tragedies.

My job is to listen and serve everyone in our community, whether we agree on every issue or not. So today, I wanted to give you a chance to share your thoughts, and to give you an update on my work to save lives.

Should the Senate vote on bipartisan gun safety legislation?

Gun violence harms people in every corner of our country - including in our backyard. Children and families in our community have lived with the pain of gun violence for too long. It’s past time we act to keep our neighborhoods safe.

That’s why I strongly support bipartisan and common sense gun safety measures. Within my first 100 days of serving you, I voted to ensure universal background checks and close dangerous loopholes in gun purchases. These bills passed the House of Representatives. But the Senate has refused to even hold a vote on these life-saving pieces of legislation.

I’m the daughter of a military Veteran and I respect the Second Amendment rights of law-abiding citizens. But we shouldn’t sit idly by while more innocent lives are lost to gun violence. We must put the safety of children and families first and work together on common sense gun safety legislation.

At the same time, we also have an obligation to stand against hatred. We’ve seen a horrifying rise in white nationalism that’s putting the safety of our communities at risk. We don’t just have a gun violence epidemic, we also have a hate epidemic. We must treat this as the crisis that it is.

We may not be able to prevent every gun related death. But we can make progress if we have the courage to act and work together.

Look forward to hearing from you.

At least she's doing something. Most of the Republicans are too lazy to even vote on it until Fall.

I expect a lot of crybaby Republicans to respond to this but let's not forget that she trounced her competition and it's unlikely that anybody is going to beat her in the next election.

Weir has a good rep. I think she's worth voting for or at least considering. Johnson County isn't anti-Gun. It was time for Yoder to move on and I'd still vote for him as Senator instead of Kobach.

Sharice will defeat Weir by no less than 10% of the vote. Her constituents respect her and value the job she is doing. Much better than Yoder.

I think Sharice will lick Weir. In the election.

HEY CHUCK! SHE MENTIONED YOU!

I appreciate Sharice getting her constituents thoughts on the issue. She's representing....novel approach.

Well, whites denounce her stupid RACIST shirt that has INJUN TRIBALISM HATE emblazoned on it: All My Heroes Killed Colonizers.

"One of Chicago’s major hospitals was forced to temporarily shut its doors to new patients last weekend after being overrun by wounded victims following a record-breaking nonwhite gun crime spree which saw over 59 shootings and seven fatalities."

Its a moral panic, the new witchcraft. Evil whites and "White Nationalism" even as here in KC, blacks kill, murder and rape at an outrageously disproportionate rate, while idiots like Sharice Davids tell us that White Nationalists are under every bed as she IGNORES THE ANTI-FA KILLER IN DAYTON OHIO.

And its a sign that the big Lie (diversity is strength, all men are created equal) is harder to defend every year.

So...the left and our existential enemies need the cascading kristallnacht of "white supremacy" as a formal excuse to genocide us...
Liberal ideology today, like the church doctrine before it, cannot be questioned otherwise you will be publicly condemned, doxed, harassed, fired and will lose some of your rights aka the modern version of being publicly burned at the stake. The Church fueled hate and violence against their detractors, including scientists, who dare question their ideology and the left today is doing the same with a modern touch but using the same kind of hysteria...Unironically, the whole ruse is being pushed by the same people who foisted the Russian collusion hoax on the American people for three years

The Left is unsinkable. You'd think that the collapse of three years of hysteria would put a serious dent in their credibility, but in this current clown world, they just keep going stronger and stronger.

Sharice Davids is another lying liberal who can wear t-shirts and hate white people, but if any white person calls her out, for the double standard, then he/me is a racist.

Fuckin right I am.

Fuck you Sharice I am just as racist as Farrakhan, Biden, Funkhouser, Booker, Harris, Sanders and the entire pantheon of Progressives who make bank every day on Hate.

#Me Too Fuckers, I hate you right back!!

A friend in Kansas City said...

Life isn't fair and we're sorry it has treated you so harshly. We have no doubt you are a smart man and deserve to be rewarded with far more gratitude then you have received in life so far.

Please turn in your guns if you think the pressure is too great for you and ask for help. There are many places that can help you get back your calm and listen to your concerns. If you just need someone to listen to you, there are people who are more than happy to do. I just don't want you to think there are no options out there for you. There are a lot of people on this blog who respect your opinions and value your criticism. You are a good person who has value. Remember that. Always.

You're very kind, but that ain't gonna cut it.

White people, especially in the Progressive/Fascist/Democrat-seeking totalitarian control over us all Party are imbued with absurd, ethnomasochistic, self loathing and it will bring this nation to the verge of annihilation. Actual objective reality, means nothing to the Progressives who wail incessantly about the KKK and White Nationalism while we go deaf from the sound of gunfire and suffocate on the smell of cordite emanating from the gun barrels sported by "The Protected Class". It is a Bizzaro world where "Alinskyite" PROJECTION by the left carries water for the forces of chaos.

C.A.I.R. (“Some people did something…”) Support for terrorist organizations that seek the destruction of the Occident? Okay.

The rise of White Nationalism is long, long, long overdue and pushing back against a patently false narrative that is categorically proven false every day, yet promoted by a corrupt and necrotically Progressive media, IS A GOOD THING.

Don't be afraid of hate.

Ya think Charles Martel didn't have HATE in his heart in 732 at Tours?

Ya think the Free French didn't have HATE in their hearts during WW2?

Ya think the Russians didn't have HATE in their hearts during operation Barbarossa?

But you think that white Americans, who are accused of uncommitted crimes of Racism and pilloried at every opportunity by Politicians, the Main Stream Media, Hollywood and beaten in the streets by violent Anti-Fa thugs (When not being killed by local thugs.) shouldn't feel HATE.

I agree with Chuck. Oh, and Rosanna Arquette is Jewish, not White.

I doubt Yoder would do that and Roberts and Moran, Hawlery and Blunt damned sure won't

Their is not gun problem in white Johnson County but one black KC.

Chuck's off the rails. Chuck, please post a pic so I can avoid you.

The black murder problem is actually only in two places in Missouri, killa shitty and shitty Louis, two top five for most murderous cities in the country, also run into the ground by dummocraps.

Just one question, if white progressive politicians are running around trashing white people, where does that leave them come voting time? I mean seriously, they’re gonna convince everybody that being white is so offensive no whites will ever get elected again and what will the lyin cheatin White progressive’s do then? Outta work and it’s their own fault! Hahahahaha!

The demoncraps are off the rails, chuck speaks the truth!

One cannot legislate for idiots.

Davids is a clown and an embarrassment who is the product of little more than a short-lived fad.
She will be gone by the time the snow flies in 2020.

“All My Heroes Killed Colonizers.”

Sounds pretty racist to me.

Sharice is a stupid cunt.

Wish she liked cock, what a waste.

Ask and yet shall receive.

Here's a picture of chuck.

She is a racist.

5:53 obsessed much? This is considered bullying and harassment and will be reported, you sick fuck

So no outrage at the racist sitting dyke sharice??? I can’t believe the snowflakes in Johnson co. didn’t throw a fit.

The puppet Davids just responding as her handlers told her.


For all of you liberal pukes that think Sharice Davids isn't racist take a look again at the t shirt she wore saying her heroes killed colonizers. Are you so STUPID that you can't see she is a RACIST of the worse kind???? The kind that wants to kill you! And to the person who says republicans are lazy? Right kinda like Hillary Clinton who expected to win by sitting on her ass and crapping her pants. You democrats are nothing but Anti American trouble makers. Can't wait to purge this country!

VOTE THE RACIST SCREWED UP SHIRICE DAVIDS OUT!

Somebody had to ask!

There is no klan, sorry for you’re failed attempt to blame whitey for everything, white guilt is over bitch. That narrative is dead and gone.

6:28, this is considered hilarious and will be reported.

She will be gone and forgotten in less than a year and a half. She will have no impact. In five years no one will remember her name. It's ridiculous she was elected.

Sittingdyke sharice is just mad her people got their ass’s kicked, if they weren’t savages to begin with.......

Davids just increased her lead in the next election from 10 to 12 points.

Black males aged (15-35) make up 3% of the Nation’s population, and are responsible for: