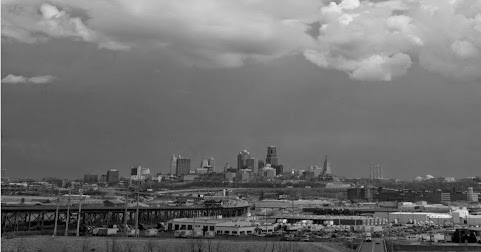 The Kansas City homicide count is already past the century mark and this weekend politicos and law men are working to prevent the violence from spiraling further out of control.

To wit and in much the same way as a faraway hurricane threatens to ruin the plans of locals . . .

TOP ECHELON KANSAS CITY INSIDERS REVEAL: AUTHORITIES ARE PREP FOR SPATE OF DEADLY VIOLENCE THIS WEEKEND AND HOPE TO PREVENT BULLETS RAINING DOWN ON RESIDENTS!!!

Expect to see more law enforcement on local streets cracking down on locals in every respect.

From DUI saturation patrols to an increased surveillance across the metro . . . Local law enforcement expects an uptick in violence and hopes their efforts will prevent the record-breaking Kansas City murder count from reaching new heights.

more thugs in jail would be a good conclusion for Kc Summer.

If it only where that easy as locking up the bad guys. You TKC dweebs don't realize that a simple call to a decent lawyer gets most criminals out in time to the party that night. KC jails are a revolving door and the conviction rate around here is a joke. It's not the police to blame but judges who let one criminal after the next back onto the street.

All sounds like a great time. We should sell tickets.

^^^ Sad but true. Some tough tactics are the only thing that will work.

Wished I cared like you losers. I don't. I'll be at the lake. You deal with it. Make sure you stay on here all weekend. It's the safest place for you all. Have fun!

Mogadishu on the plains y'all

^^ You couldn't hit water if you fell out of a boat.

^^and yet he's at the lake, and you? You're here. Advantage him. Weird.

Chimpy! Where's our Maude and Matlock? Give the kids what they want or no more bananas for you!

It's not the bullets that are "raining down" that should concern us.

I just saw a meet and greet, have coffee with a cop at Starbucks scheduled for the weekend.

Do the negroes even observe Labor Day? Most of them don’t work. They have every Monday off ( and Tuesday-Sunday ) so why should this weekend be any different?

^^I don't know. You don't seem to work either. You're here. Asking dumb questions. You'll be here tomorrow, the day after, the day after....so on and so on.

^^You mean a blog that is full of geezers spewing racist, misogynistic, hateful, shit day after day, over and over, with nothing of value or original ever contributed is not worthy of snark??

Hey chimpy, prove any of your statement with truthful facts otherwise shut the hell up.

With the extra police you should be extra safe at any doughnut shop in town! Hahaha!

Yay! Chimpy is butthurt and flinging poo again! The kids will be so entertained.

Back on subject, these folks efforts may well keep the murder count for the month of August down from 107 or 108 to as low as 110.

"Crossroads Galleries, Studio Spaces, Restaurants, Retail and select Businesses will be OPEN on Friday, September 6th, 2019.
However, Food Trucks, curated Art Vendors, and performers will NOT be permitted on streets and sidewalks within the festival permit boundary due to the loss of General Liability Insurance and the inability to obtain new coverage in time. As a result, there will also be no street closures."

CCW all day everyday be safe my white brothers.

blacks ruin everything. Add first friday to the list

how do DUI checkpoints stop people from getting shot? cops dont prevent crimes more like a justification for the police state to harass people

I'm sure there is a correlation between the number of taco trucks and thug shootings. Kudos to our wise city leaders for finding it!

DUI saturation patrols? No public drinking for Teresa Loar!! She could get arrested and embarrass herself. She will have to drink at home alone in the dark. Just like every week night.