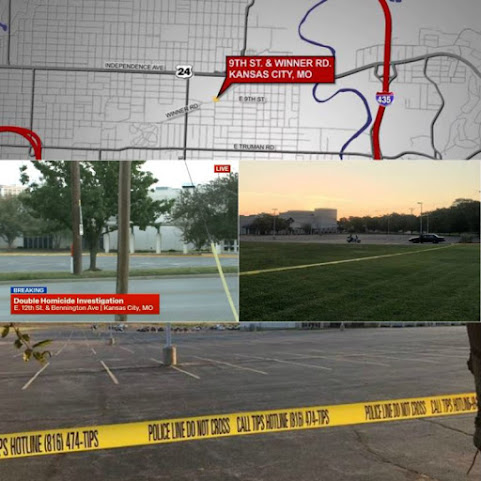 As if a sign from above contradicts the constant argument against guns and urge to limit Constitutional rights, this morning Kansas City's murder count rises by way of the knife.

The Kansas City Police Department is investigating after two people were found dead early Tuesday morning. Police say the victims were both male with apparent stab wounds. Officers were called to an area near 9th Street and Winner Road around 5:41 a.m.When they arrived, they found two bodies.

Fox4: Investigators are still trying to determine whether the victims have any connection to the nearby Sheffield Family Life Center, a church.

KSHB: A tow truck driver found the men, who were in their mid 30s, in the parking lot of Sheffield Family Life Center just before 6 a.m.

KCTV5: Police are investigating after two bodies are found behind a church.

Murder city. What a shame.

There's hope here. Maybe it's only one homicide and just a homeless guy knife fight.

Just one mean ass homeless guy walking around town and giving everybody that thousand mile stare. This is why you should donate to charity and not give out random cash to the bums.

Using "Liberal Logic", the recent years of high murder rates in KCMO have happened while Dana & Parks have a talk show. Take them off the air and the murder rate will go down.

How many murders have been committed while the millennial mayor has been in charge? What’s he gonna do to stop the madness? Anything?

But, but, but CNN said it was guns killing people?

Bad people are going to kill by whatever means they can use.

Waiting for Sly James to rise from the politically dead to declare that Jefferson City isn't doing enough to limit the availably of sharp objects on our inner city streets.

9:04, CNN admits yesterday that the Ohio shooter's Twitter account @iamthespookster shows he is anti-Trump, pro-Fauxchohontas Liz, wants ICE abolished, and retweeted @iampoohcowboy_drew doxxing of ICE personnel, among plenty of leftist ranty content. Most other fake news hucksters are still trying to paint the nutcase as a radical righty whitey.

Amish fighting over a butter churn ?

I see that THE KANSAS CITY ATHEIST COALITION is vomiting out comments.

No, some of us are non-Association Atheists, fool!

I guess next there will be calls for knife control. The government will pay you for your knives.

If only there were fewer guns out there. oh wait, this just in, people will kill each other with whatever they have handy. I guess we can't just blame all the in animate objects.