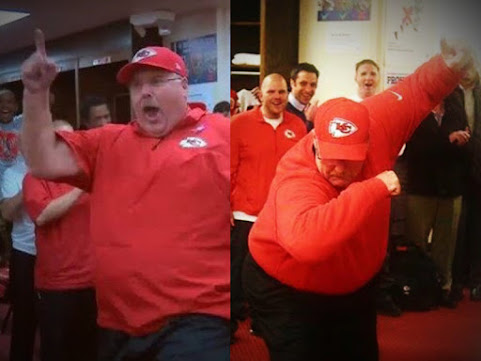 Before the season officially starts it seems the Kansas City Chiefs confront serious challenge to year-round hype for their rising star QB and rest of the team comprised of various domestic violence suspects . . .

IS COACH REID NOW THE WEAKEST LINK FOR THE KANSAS CITY CHIEFS?!?!?

It's easy to look good telling world-class athletes what to do but more astute observers notice that even amid an exceptional talent pool the play calling, clock management and overall "vibe" of the team seems tainted by Coach Reid's undisciplined style . . .

We'll tread careful given that a legendary local sports talker was fired earlier this year for daring to mention this criticism albeit in a creepy context.

Nevertheless, the uncomfortable topic of self-control remains worthy of discussion because millions of bucks subsidized by local taxpayers are on the hook.

Again, skeptics not that throughout Coach Reid's tenure the team has lacked focus and whilst they dominate the easy games . . . They often fold in the clutch or when confronted with equally hungry teams.

Sadly, fanboys will spend the entire work week disputing any questions about the over-hyped team and the inevitable season of victory that may or may not lie ahead.

Arrowhead Pride: The Chiefs head coach spoke to the media following the 17-7 loss to the Pittsburgh Steelers.

Reid is good enough. With Mahomes as QB it doesn't take much not to screw this up.

the supporting cast is also excellent as well. Chiefs finally have a world class receiving crew and a decent o-line. It's now or never. They haven't been this well equipped for a season in 40 years. It's finally time to bring the championship back to KC.

KK was fired for being a d-bag not for criticism. Funny to see that life goes on and his old station is doing even better without him.

^^ I agree - I don't feel the team needs Coach Reed to lose, I think they can manage that all on their own.

The defense is so revamped that it has become a huge question mark. I don't see how it can be worse than last year, but if it is, the Chiefs will be lucky to be wildcard team.

KK was fired because all the KU fans were just waiting for something to blow out of proportion to get him off the air and to quit talking about the warts on KU sports. Now, there's no radio host who will bring a well-rounded view of KU sports. Petro's wife went to KU, so he doesn't want to upset the apple cart. Also, the head honcho at 810 am is a KU grad. Anyone who criticizes KU is going to feel the heat in this town.

Since the preseason means nothing, your questions are irrelevant.

Chiefs will kick-ass this year. I don't see the point in hating them.

I just hope people won't take out a second mortgage for tickets this season when there's a real chance the might only go 9-8 with one wildcard win.

Mahomes can't carry the whole team on his back, it takes at least 10 top ranked players to get a team into contention AND they have to stay healthy all year. Right now the Chiefs have about 5 really talented people and the rest are just the same old jouneyman players that always linger around KC. Don't get me wrong, there's always a shot when you play and try your best and that's where I actually agree with this post. Reid might not be the man to get the Chiefs to the promised land.

Andy Reid sucks and has no chance of winning a Superbowl. Don't believe me? Just ask the people of Philly. But hey if you say anything remotely negative about the Chiefs in Kansas City you are blacklisted immediately form the tv, radio, internet, etc.......people here don't want to hear the truth.

You have to remember, nothing but busted, bitter, broken, geezers populate this site. Much like everything they comment on, they no nothing about football!

^^And you know nothing about spelling either, Weird

National Anthem Curse will stop them.