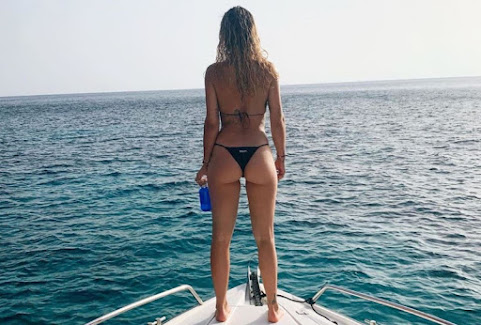 We've been testing out a few content strategies over the past week and the response has been pretty good but still probably not as "influential" as all the derriere photos on America's favorite social media app . . . Sorry but KC news doesn't have as much interest as the increasingly prominent backside of pop culture . . . And this inspires our morning news peek:


How does Independence have the most delicious tap water?

Independence's tap water has been named among the top-five best-tasting tap waters in the world for seven of the last eight years at the Berkeley Springs International Water Tasting Competition, the largest such competition in the world.

KANSAS CITY, Mo. - When a gasoline tank exploded on Southwest Boulevard in Kansas City, Kansas, on August 18, 1959, it took the lives of six people and changed how American companies store gasoline.

Missouri is giving businesses that want to run medical marijuana facilities more time to file applications.Missouri's Department of Health and Senior Services on Thursday extended the deadline until 4:30 p.m. Monday.

More than 1,000 motorists illegally passed school buses in Kansas during a one-day test in April to determine willingness of the public to respect stop sign arms and flashing red lights deployed by drivers.Jim Porter, the southeast Kansas representative on the Kansas Board of Education, said he was alarmed 1,040 of 3,300 buses involved in the survey were improperly passed by motorists.

As Chris Goode prepares to open a new Ruby Jean's location Saturday inside a Whole Foods Market south of the Country Club Plaza, the health enthusiast's hustle hasn't outpaced his thirst for community, he said.

Wow all this world class culture this town offers is stunning isn't it?

I can hear all the kids from rural Kansas and Missouri yelling.

^^you both seem really lonely and pathetic. Your comments were weak. How come you don't have anything better to do?

Yes, why don't the hang out in the Library and troll other people?
After all, that's the best possible way to spend a lifetime, isn't it

OMG a new Ruby Jean’s in one of the most richest and enlightened places on earth! 301 E 51st St! Can't wait to sip a smoothie on the patio while watching unicorns chasing rainbows over Brush Creek!

Gotta get a couple of those seats for the front porch.

^^you both seem really lonely and pathetic. Your comments were weak. How come you don't have anything better to do?


Were you talking to yourself while staring in the mirror at four days worth of stubble before starting your daily Tony's shift 9:37?

The storage tank fire on Southwest Boulevard 60 years ago not only changed how gas was stored and handled it also changed how firefighters dealt with such fires. Firefighters the world over have studied and learned from that fire and a large part of that was due to the coverage provided by people such as Charles Gray and the camera crews who captured the event all on film. The film shot that day aided greatly in letting people being able to study what was known to have gone wrong to see how best to try and prevent it in the future. It was indeed a dark day for firefighters on both side of the state line. I vividly remember the pictures being shown on television during the fire and being with my father at his station in Overland Park where some of the local firefighters had gathered to be on standby if needed. This fire also laid the groundwork for the mutual aid agreements between most all fire depts in the greater Kansas City Metro area being put together. While much was lost from this fire much was also learned from it and has aided in the prevention of possible further loss of lives not only to firefighters but for civilians as well.

Hope things go well for Chris on the Plaza, he's a good guy.

The Ruby Jeans inside the YMCA in NKC closed, their prices were too high and staffing was problematic, but it should mesh well inside Whole Foods, since the WF customers are accustomed to astronomical prices and seem to have no idea what they should be paying for the quality they are receiving there anyway.

Jeez stupid dave...thanks for just repeating everything verbatim from the story. You added nothing. Also, thanks for finding a way to insert yourself into the story like you do ALL the time. Dullard.

^^^^STFU loser. He added some info that wasn't covered in the story plus how he remembers things from that day. So 11:38 how about you go fuck yourself, your constant attacking bullshit/hate is getting old.

As for clustering so many posts in one comment place, this might be hard for knuckleheads to know what they are commenting on, Tony.

How about labeling as A,B,C???

So, A would be stadium seats
B would be Indep. water quality
C would be the fire

My comment would be:
B: Does crack really taste that good???

^^Only in your mind!

I agree with Tracy.

Clusterfuck with too many disparate stories.
Turns this site into WhackATroll.

Why are you doing this, Tony? Does it save you time? But still generate the nickel a tickle income from the bikini clickbait?

I need a drink. Just not that Independence water. (B)

How about this.
Whack the Captcha to death.

Past military records archiver....friend and family to FD across 3 continents, through 4 generations. said...

In 1959 many of the firefighters on KCKFD and KCFD rosters were combat experienced veterans of foreign wars. Some had MOS or AFSC fire suppression certifications from one, or more, of the US military branches. Military operations research of fire suppression and the real war defense from and deployment of incendiaries influenced the application of fire sciences to civilian fire departments. Tactics, tools, and technologies advanced much from that 8/18/1959 major fire and explosion on Sourthwest Boulevard. Brave, educated, and dedicated professional firefighters are beneficiaries of the warriors, scientists, and instructors before them. They're beholden to the USAF and other instructional systems that continue to advance global knowledge for fire safety and response.

^^Good thing you didn't use your real name or 11:38 be calling you stupid.