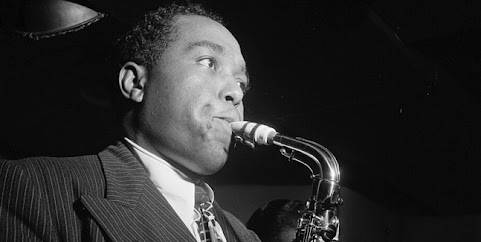 Background on a local legend according to the world's most accurate encyclopedia:

Charles Parker Jr. (August 29, 1920 – March 12, 1955), also known as Yardbird and Bird, was an American jazz saxophonist and composer. Parker was a highly influential jazz soloist and a leading figure in the development of bebop,[2] a form of jazz characterized by fast tempos, virtuosic technique and advanced harmonies. Parker was a blazingly fast virtuoso, and he introduced revolutionary harmonic ideas including rapid passing chords, new variants of altered chords, and chord substitutions. His tone ranged from clean and penetrating to sweet and somber. Parker acquired the nickname "Yardbird" early in his career on the road with Jay McShann. This, and the shortened form "Bird", continued to be used for the rest of his life, inspiring the titles of a number of Parker compositions, such as "Yardbird Suite", "Ornithology", "Bird Gets the Worm", and "Bird of Paradise". Parker was an icon for the hipster subculture and later the Beat Generation, personifying the jazz musician as an uncompromising artist and intellectual rather than just an entertainer.

Because he doesn't have an active FB profile, there was scant local coverage.

Kansas City Lightning: The Rise and Times of Charlie Parker by Stanley Crouch

Jazz is a forgotten form of music. Only remembered by old bald men with huge tummys that make them look pregnant, that are drunks, suffer hearing loss and live in their mothers basement

Try to get a table right now at the Green Lady Lounge. Won't happen. It's full of millenials listening to jazz.

^^^^^ B.S. - You're in the trailer and you're alone. Green lady club has a few people in it but not as many as usual because of the rain. Don't fake it, too easy to find your the facts.

Jazz appeals to people with mental illnesses. Its the fav music of people that are schizophrenic. It helps calm manic depressive people till they go manic. It eases the lives of 60 year old fat men who are unemployed and like to smoke pot. Heroin was the main juice of Jazz greats. Its a depressing and odd music that quickly going defunct. 18th and Vine is just a shooting range, there is no interest in jazz there. Jazz is a blight. Only 1% of the population likes it and they are the odd ducks, the left handers, the sexual porn lovers, those with unsatisfied needs of grandure.

Everywhere you go in this town it seems you're hearing the black folk hashing out that old Coltrane vs Mingus debate.

The jazz talk in this town is just insanely passionate.

Parker didn’t live here or give a flying fuck about killa shitty, this whole “Charlie parker” thing was dreamed up by cleaver so he could waste hundreds of millions of dollars on his false dream of making this town something it’s not. Sorry folks, we are and always will be a small flyover town that nobody really gives two shits about.

^^and yet we are not whatsoever in any way shape or form. Weird.

Charlie Parker did exist, and had some level of fame.
He also hated Kansas City, and on his deathbed begged his wife
"Don't let them bury me in Kansas City!"
Guess where his grave is?
This tells you everything you need to know about the Kansas City Jazz scene.

^^^^ 100% correct, he fled killa shitty when he was nineteen and was a big time heroin addict and alcoholic, he was not born in KCMO as cleaver tells people, he was born in kck, he wanted to be buried in New York but his mother wanted him here, can’t blame her for that. I think he’s in the paupers grave yard on blue ridge called Lincoln cemetery.

Jazz is for queers and steers

Yes, the real jazz hero’s just passed through Kansas City two get to real jazz cities. Kansas City Jazz is hyped up to be more than what it actually was. The Negro Leagues thing is real. The jazz thing is really a half truth but mostly a lie.