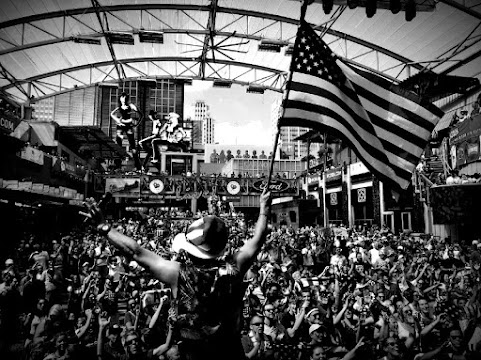 Today's big event inside the loop was highlighted by MSM and seen by fans of women's soccer around the world, which has to be at least 3 or 4 dozen more people . . .

Here's a glimpse of the cowtown cheering section:

The event is kinda billed as a rally against Prez Trump:

TPM: Rapinoe’s Girlfriend Hits Trump: She’s Going To Do Her Thing ‘To Her Own Damn Rhythm’

Atl: The U.S. Women’s Soccer Team Is in the Finals. Here’s Why It Matters.

However, we note a more practical concern . . .

IS ANOTHER BIG, SWEATY PARTY INSIDE THE P&L DISTRICT WORTH MORE THAN MILLIONS FROM THE GENERAL FUND?!?

City manager Troy Schulte said that, in the first few years, the district was generating about $5 million in tax revenue, leaving a $15 million gap that had to be filled from the city's general fund.

In the last fiscal year, the total debt service was about $20 million, but the district was only able to generate $4.7 million in tax revenue. Taxpayers had to pick up the rest of the tab.

Over the past four or five years, Schulte said, city leaders have had to take an estimated $13 million to $15 million a year to close the debt service funding gap.

Another fun fact is that the revenue situation is worsening according to City Hall insiders and this monstrosity is costing even more cash.

Bring those fine young men of the US Women's Soccer team to town. Plenty of submissive lesbians here for them.

A few milluion here and there...until his ass cant take it anymore!

Really surprised that so many people can pretend to watch this stuff. 3 or maybe 4 points scored in a game. It's really just a social party with some good cheering, lots of drinking and not much action on the field. Makes baseball seem exciting by comparison.

I watched the last time they were in the Finals, & I plan to watch Sunday.

The first step of and "Emergency Treatment" is to STOP THE BLEEDING!

Only in America could a foul-mouthed, hysterical, lesbian, soccer player become an Independence Day icon for liberals.

That said, P&L is tremendous waste of taxpayer dollars.

I was rooting against these filthy unpatriotic lesbian show offs.

It's fun because your safety is guaranteed; negroes hate soccer so they don't go to this type of thing and then nobody gets shot or raped or robbed.

^^and you forgot the best part...no pants-shitting geezers either!! That guarantees a good time. Those folks were having fun yesterday! That's something geezers never have!

And you can thank KAY BARNES for this deal

The 2014 Women's World Cup Champion team was beaten in a match with a junior high boys team. Much Ado.

^^So what? You're old and will dead sooner than you think. Yay!

Funny that the same people who bitch about soccer scores probably follow baseball religiously. A sport where a good % of the play is spent scratching nuts and just......standing around.

How can you be legally blind and watch television? Social Security investigators love seeing that statement.

Current building materials and methods guarantee that in 2040 the buildings in P&L will be showing their age and require more city help to stay standing. Any consultant who was 10-14 million dollars per year off on his/her projections, should have consequences...but it's the safest job in the world where you can be 100% wrong and still keep working. See: New Convention Hotel.

The technology available to eye specialists today leaves no mysteries regarding the condition of a patient's eyes. No one simply fudges an eye chart test and is granted Disability Assistance.

Ah, the P&L. The subsidized wasteland of domestic draft, baseball cap bros, and mild to moderate venereal diseases. If you peaked in high school, it's a can't-miss destination!

And aren't these the same hyperaggressive twats who display bad sportsmanship every time they win? Go France!

(or whomever the fuck they're playing. No one really gives a flying fuck)

^^and yet they do as evidenced by the massive crowds there. Weird.

And the blog's loyal practice dummy shows up on cue. Not very interesting or challenging but with all the loyalty of desperate loneliness.

Remember when hope solo's roast beef flaps were leaked for all to see. That's the real horror of women's soccer

^^^I once made the mistake of searching "hope solo nudes". One example of 'not all naked women are good naked women'.

Was the toy train busy?