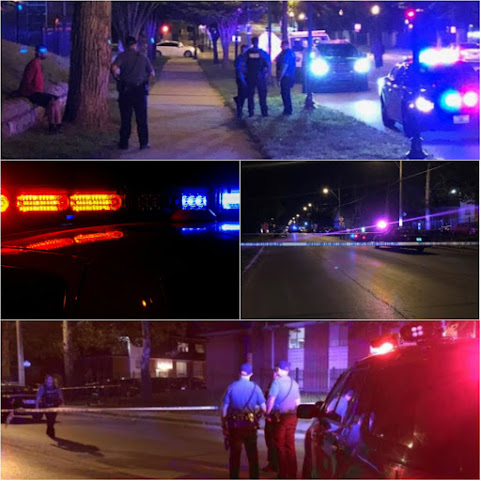 Read between the lines on this story . . .

LAST NIGHT THERE WAS A ROLLING GUN BATTLE THAT LASTED ABOUT AN HOUR THROUGHOUT NORTHEAST THAT RESULTED IN THE 58TH KCMO HOMICIDE!!!

According to our blog community there was an army of police on the streets to secure the area throughout the night as the shoot out covered several city blocks.

FOX4: Police also received calls related to the incident in the area of Independence Ave. and Maple Blvd.

KCTV5: One person has died after a shooting Saturday night.

So I guess that answers the question about reducing homicide in KC. There's really no interest in it and no way that we'll see any real progress because very few people are actually interested in fixing the problem. Even this blog gets content from it and people reading and commenting. It's a vicious cycle but the bodies keep piling up not matter what. Likely to see 155 murders this year.

This wasn't the only gun fight in KC last night. Just the only one that made the news.

Was this close to MLK Blvd?

Baltimore has 131 murders year to date, so their hood rats are much more proficient than ours. We need to finish June at 75 or more to have a chance at 155.

What was the count at this time last year?

We need some hip-hop concerts this summer. Free, so all the hood rats can go.

There's way more rolling gun battles than this one you only hear about this one because someone was shot. Most of these gun battles are not reported or not disclosed to the public anyway. When the sun goes down on KC there's gun shots all over the city not counting the car break ins and robberies you don't hear about. I heard gun shots on Brookside Blvd and it was treated as ho hum no big deal.

And the manpower. Way too many people in positions making $100k/yr, take home car, and little responsibility. Not enough foot soldiers to be close to effective

As long as the hoodrats keeps those bodies rolling to the morgue vibrant world class KCMO momentum keeps climbing.

Stop looking to the Government, or Whitey to resolve this problem.
Only the black community can solve this.

HOMICIDE IN KCMO IS A BLACK THANG!

Some 72-percent or more of all homicide victims and suspects are Black, and that's according to KCPD data. It's been that way for years and years.

In regards to homicide in KCMO who's the problem?

DO YOU DARE FACE THE TRUTH?

LEAVE ALL ASIANS, HISPANIC FEMALES, AND WHITE FEMALES ALONE!
IF ANYONE IS ACTUALLY SERIOUS ABOUT REDUCING HOMICIDE IN KCMO, THEY WOULD FOCUS ON YOUNG VIOLENT BLACK MALES 17-34 YEARS OF AGE. FACTS MATTER!

Last night's shooting will be solved because folks in the "community" know who is responsible and will call the tips hotline and provide the police with information to make their "community" safer.

NOT F-----G LIKELY. BLAME RACISM, WHITEY AND THE POPO.

(What do JJ and Quinton have to say about this?)

When do we bring back marksmanship training to schools? Should not take an hour to put a mofo on the ground.