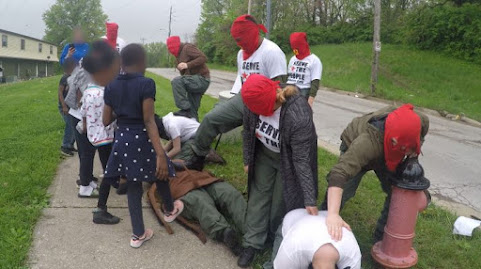 Around International Workers’ Day a media note was sent our way but it wasn't until now that we had time to consider it as part of the bigger local conversation about worsening housing conditions throughout the metro.

A group of self-avowed Communists call themselves Serve the People – Kansas City and Revolutionary Worker’s Movement and they recent shared an "interesting" street performance with a local housing project.

Highlighted in May Day news from around the nation, here's the background on the recent local exhibition:

"They chose to hold their performance at apartment complexes where property managers have seriously neglected the health and safety of tenants and carry out baseless mass evictions periodically."

"The theatrical play written for the event depicts a trio of put-upon renters – one of them a tenant organizer – who are pushed too far by the poor conditions of their homes and the pending eviction of their neighbor and organize to demand an end to evictions and an end to the inhumane conditions they live in."

The streetside sketch even involved a bit of audience participation.

"In the cultural performance by STP-KC, children come out to help defeat the landlord who is depicted as a roach."

Apparently, there was a bit of objection to this alternative local theater but it seems that local leftist protesters & artists won the day.

"Upon arriving at Green Village, the first complex, the organizers and the tenant who showed up early to greet them were met with angry management who were quick to call the Kansas City Police Department. The performance began with neighborhood children sitting on the grass for a better view and young adult tenants gathering behind them."

"After the manager was chased off, the play resumed with a larger and more enthusiastic audience drawn in by the commotion."

Just another day of playing dress up and marching around protesting something, anything really, in vibrant KCMO.
The cardboard, Magik Marker, and costume businesses are really humming.
And the affect on pretty much anyone who doesn't have a lot of time on their hands with nothing better to do continues to be ZERO.
Why don't these folks grab some shovels, get some asphalt, and fill some pot holes?
Probably wouldn't attract much of a crowd or the local television "news" team, or provide much of an opportunity for selfies.
But it would actually accomplish something useful.

23rd and topping is no place for a bunch of mis-guided white kids, I don’t care why they were there, they could’ve been killed. I love the little kolored kids kicking the “landlord” trouble is these little porch monkeys will do this in real life. Stupid on all accounts.

Interesting might not be the word for it. I think it's more provocative than controversial. But at least they're going to the slums instead of just talking about them.

Antifa trash. They don’t want to pay rent. Everything free! Lot of heroin junkies are antifa.

International Workers Day was May 1st? Took the Maoist PYO Crew two weeks to get their press out.

Hey you cosplayers are cool!

Halloween isn't for months, fuckups. There are plenty of ways to help the poor and disadvantaged. But then you'd have to...let me whisper it...work, or something.

^^^ BE CAREFUL! Those people don’t speak that word! That one word sends these people in convulsions and makes them cry like little babies, now they will have to go to their safe places and hug their teddie bears and drink specialty coffee for hours and hours, they’re also gonna need months of therapy, man, your crazy for saying that word!