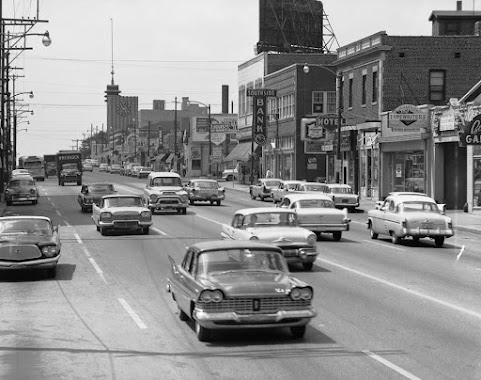 To start this #TBT we celebrate the an old school at classic cars on surprisingly nicer Kansas City streets.

And right now, here are the news items we're checking:


Poetry in motion in front of Union Station

KANSAS CITY, MO (KCTV) -- Streamers made of holographic film are designed to shed wind instead of catching it. Soon, thousands of the streamers attached to a thin net will sway in Kansas City. As the finishing touches are added to Reflecting Motion, it's clear the 12,000 square foot art installation is intricately designed to capture what nature creates.

Kansas City, MO - Cultivate KC is assisting the Missouri Department of Agriculture with the launch of the Missouri Senior Farmers' Market Nutrition Program. Program Manager, Kathleen Foster says those who qualify will receive $60 in vouchers to use on fresh produce at the farmers market.

A popular Kansas City comedian celebrated his birthday Wednesday by buying lunch for others.Elliott Threatt bought lunch for 57 people on his 57th birthday.Instead of hosting a party, Threatt said he wanted to show gratitude to Kansas City for what he calls a blessed life and successful career."I'm Kansas City born and raised.

Hide Transcript Show Transcript SPEEDWAY IN KANSAS CITY, KANSAS, CAN'T SEEM TO CATCH A BREAK. >> THE REVVING OF ENGINES IS REPLACED BY THE REVVING OF WATER PUMPS. >> TODAY WE'RE CONTINUING TO PUMP AND IT'S AN EVERYDAY PROCESS. >> PETE HOWIE HAS GONE FROM MANAGING A RACETRACK TO MANAGING EXTENSIVE FLOOD DAMAGE.

This week, we had the chance to meet "Rey" - a sweet 2-year-old pup who lives at Wayside Waifs right now. Rey is house trained and can sit and shake on dem...


20 Years After "No Scrubs," We Look Back at the Song's Best (and Worst) Covers

Photo by Jeff Kravitz/FilmMagic, Inc via Getty Images Two decades after "No Scrubs" first topped the charts, reaching No. 1 on April 10, 1999 and staying there for four consecutive weeks, you'd be hard-pressed to find anyone of a certain generation (hint: rhymes with "schmillennial") who doesn't feel compelled to sing along when they hear TLC's era-defining kiss-off to scrubs and busters.


IN FOCUS: Hallmark has a special connection with Mother's Day

There are just four more days until Mother's Day, and one of the holiday's biggest traditions can be traced back to a company right here in Kansas City.

Call me Katie,I have a mother’s day gift for you. You are so hot .


If the farmers market gives away food for free to seniors they had better ask for prof of income!!!! There is a couple in Central Hyde Park that scams food pantries and hand outs everywhere in the city and they have money enough to live in a big house and hire tuck pointers. BEWARE

^^Thanks Gladys Kravitz! Now mind your own fucking business you gossiping little bitch!

^^^ Watch out, Tony's posters, Geezer Hater is up and at work giving us his best "Church Lady" impression!

Talk about a little bitch, doesn't this whiny wimp have anything better to waste his life on?

^^some would say the same of all you whinny wimps crying everyday about everything. Wouldn't you say so wimp?

When you care to send the very best.

^^^wow. Did you just learn how to do that baby boy???? Fucking dullard.