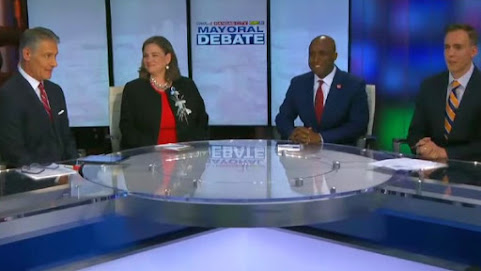 We offers a glimpse at the debate for insomniacs or late night lurkers looking for a reason to change their lives . . .

The YouTube documentary of tonight's conversation about ruling Kansas City:

FOR THOSE WHO DARE: TELL US WHO WON THE FIRST KANSAS CITY MAYORAL DEBATE AND WHY!!!

Jolie did a lot better than I thought she would. Her answers were clear and concise and she did focus more on policy. Quinton made a lot of promises without much evidence about how he would back it all up.

Quinton was the real winner no matter what the TKC trolls decide.

He was articulate, convincing and professional.

Jolie added a couple of things I had never heard, which I guess is fine, as maybe I just missed it before. First, the new transportation department. Creating an entire department would cost -- you'd have to staff this new department. Where is the money coming from? Also, I've not heard her differentiate herself from Slyster before - explaining how she would have handled the airport differently. Lucas had a point - she has been chair of the airport committee from its inception. While she suggested the entire Council should have spoken up - against Slyster, I would suggest, as the chair of the committee, she should have first spoken up - if she didn't agree with Slyster then worked to get the other council members on board. She kind of threw him under the bus --- maybe it was planned that way -- since she's running for Slyster's 3rd term. She's weak, that's my major concern with her.

Fuck man, this city is fucked. We got waterworks issues that wont even be talked about. 800 million in pensions that are unfunded. millions going to developers, and millions going to 18th and vine where killings go on.

hows the plaza doing? hows words of fun, hows free day at the zoo? see the connection quinton? you piece of shit. you wont do anything to stop crime and neither will your counterpart jolie because Sylvester james backs her.

Good comment @12:47. the airport is the Waterloo for Jolie Justus.

Good grief Quinton Lucas is the worst. Does anyone honestly think he gives a shit about young black male killings? That’s his fucking voting base those families. He’s the shiny smile with the crack house district. Kansas City voters are too stupid to realize that. I mean it’s the underlings. I’m not talking about the directors of development firms with cash to donate that Sylvester James beats off too.


Hey Jolie. Does it bother you how incestuous homophobia is in the black culture in kcmo? Do you avoid talking about it for votes or would you actually be a strong woman and take a stand at a podium east of troost? I’m going to guess due to politics you will take the route of the weak. Because that’s what you are.

Does anyone know how much it costs to pay quinton Lucas to speak in front of a camera what you want others to hear? What’s the buyout for Jolie and quinton? Just trying to figure out who the best robot is for kcmo. At least sly had some personal opinions. These two are definitely programmed bots.

Here is a good question to ask next time:

The Royals are on pace to lose 108 games. Yet they are doing much better than some folks thought so could be headed to losing 120 games. Of the following scenarios - which would you support?

A. Have Sly James railroad the Airport Committee into removing Ned Yost and forcing the Royals to hire someone who agrees to dress up like Mickey Mouse?

B. Make the Royals sell the team with all the money going being forced to pay for water infrastructure. The team would be forced to stay in KC and players all fired and only former Little Leaguers under 30 get to play.

C. Have Frank White and Carwash Cleaver be the managers and do the opposite of whatever decisions they come up with.

D. Have the team pay the fans to watch. Fans only requirement is they have to stay until the National Anthem. If they move the Anthem
To the first inning- then the players don’t have to play (same as now) if the stadium is empty.

These 4 Questions will allow voters insight into better nonsense than they face now.

Vegas odds unchanged. Way out in the lead...
Quinton remains.

Lucas is definitely the worst of the two, Jolie is sLIE 2.0, we’re doomed.

The citizens keep losing. We lost the last eight years and now it’s possible to lose another eight, I don’t think this city can survive 16 total years of complete failures.

I feel that Lucas won, but I'm confused - is Justice running for KC Mayor or once again running for the State Legislature?

Her confusion about who was the Chair in charge of the Airport Committee (she was), her apparent ignorance that yet another Downtown Hotel is going to be built, and overall her seeming bewilderment on all questions, causing her to continually fall back on references to her "experience" as a State Legislator, make me wonder what office she is seeking.

A question I think should have been asked was...
"In the last two years the Kansas City Port Authority, an independent entity not responsible to the people of Kansas City, has given over $100 million in KC Tax Revenues to Out of State Developers. When are we going to get a "Port"?"

The candidates are frustrated because they don't know what gender they are.

But, what are their views on unsolicited bulk e-mail?

Narcissists will never admit guilt. They are fluent in lies, excuses and bullshit. They will deny everything, shift blame and then try to cover up with more lies. Never expect truth from a narcissist. They are pathologically incapable of truth especially if truth threatens their fantasy.

Just the latest example of why they don't call this "flyover country" for nothing.
Momentum!

Shining a light on the corrupt trash running the city of KCMO said...

Jolie is responsible for the Airport Debacle!! She was at the River Club cutting a $2 Billion private deal over drinks and thought nothing of it. That's no way to spend public money...she is not qualified to be Mayor!!!

Q’s point on hotel capacity began the win for him in this debate. Salute to candidate Lucas. Got my northern vote.

They both know citizens although well meaning are predictably lazy and unmotivated which makes KCMO city government a fertile farm for gross malfeasance at every level.


Did I miss anything

This is definitely an election where it's voting for the lesser of 2 evils. Lucas talks a big game. But where was his voice the past 8 years when S'lie was raising taxes on the middle and lower class while handing over MILLIONS to private developers and the toy train and the airport debacle? Now he's out trying to convince people that he is against all the wrongs S'lie and the clownsil have done the past 8 years? Interesting timing. It wouldn't ring so hallow if he'd made more noise speaking out against all this stuff years ago instead of now.

And if anyone believes that Jolie is anything but S'lie 2.0, I have some beachfront property in Raytown to sell you on the cheap.

No doubt Lucas is the Master D' Bater.

Jolie started off nervous, speaking too fast and fidgeting in her seat.

Quinton landed consecutive body shots with the pothole question immediately followed by the airport terminal selection fiasco question. Jolie was looking down at that point, unable to maintain eye contact.

What's rather astounding is that Jolie said it was a mistake for Sly James to "hit the pause button" when KCMO residents were not in favor of supporting a new terminal! She essentially confessed that she will not listen to taxpayers opinions, but pursue her own agenda. Unbelievable!

In her closing argument, Jolie cited streets, sidewalks, education, and crime that are dysfunctional in KCMO. She said KC needs her to be Mayor because she'll show up every day and get things done. What? If that's true, what has she been doing for the past 4 years, and years before that as a State Senator?

Lucas won this debate largely on demeanor and messages delivered on-point. Throughout, Lucas came across as calm, friendly, and informed. Justus was nervous, defensive, and reaching in her answers.

Look for Team Justus to launch negative attacks against Lucas because she can't survive multiple debate performances like this one.

Port authority spot lighter at 7:05-
Shine more light on the mysterious port authority for us. Yeah where the hell is the port? Goods and materials coming in and out via navigable river transport... Is that even a part of it or is it just yet another quasi-public useless economic development booster so typical of chamber types plus large tax abatement corporate welfare ???

We need to catch up to our peers!

"Lucas and Justus also weighed in on who they most align with in the 2020 Democratic presidential primary; while Kansas City’s election is nonpartisan, both are registered Democrats. Lucas answered Kamala Harris and Joe Biden, while Justus named Harris and Elizabeth Warren."

Does it matter what either candidate SAID?

Who will inherit the throne to Sly's Killer Shitty

Nope. Won't matter one bit. Whoever wins it'll be the same shit as it is now: Corporate welfare by the 10s of millions of dollars per year, surging tax levels on the middle and lower classes, top 5 murder rate per capita, poor schooling, worse infrastructure, overall bad leadership....what's not to love?