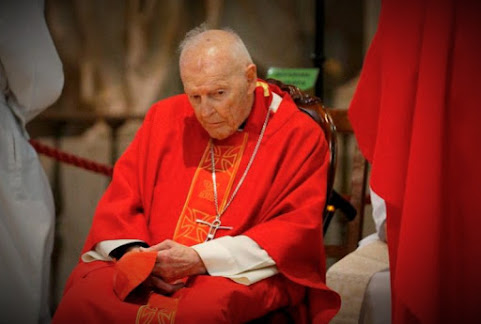 A note on cold, hard consequences and isolation at the end of days for this former Catholic leader.

Recent background from both sides:

NCR Online: People seize on McCarrick laicization for their own agendas

The latest from advocates:

Though former Cardinal Theodore McCarrick has been defrocked, we hope - for the safety of children and vulnerable adults – that Catholic officials in Kansas will keep him at the friary where he has been living.

The disgraced prelate has not been there very long. He has likely not yet been able to win the trust of nearby families. Moreover, it is a small town so it is likely nearly everyone knows who he is and why he is there. Under those circumstances, the former Cardinal would no doubt have a tough time ingratiating himself into local families and potentially damaging more young lives.

However, if Cardinal McCarrick were to move back to New Jersey or Washington DC there are, sadly, sure to be more than a handful of families who believe he is innocent or "has been punished enough" or is no longer a threat to young lives. Church official should keep him where he is.
############

What is with the catholic church and buggering young boys.?

Preferably, within the general population at Leavenworth

7:09 I don’t know, ask coprophilia boi, he can tell you! Hahahahaha!

Catholics are degenerates. They use God to fuck children and their parents keep serving them up.

The homosexual pedophilia in the Catholic Church, and the cover up of it is so abhorrent. It’s one thing to have a few loose cannons, but to have rampant abuse and aggressive shielding of the gay abusers is something else.

A bit of the back door in youth didn't seem to bother Alexander the Great much, nor Julius Caesar either. Not to mention Alcibiades, Emperor Hadrian and many others. Must be today's youth are (wait for it) weenies.

Nor the pervs in public schools, the black churches, baptist, Episcopalian, all other churches and especially the mooslimbs, nope it’s just the Catholics, at least they’re doing something, what are all these other shitheads doing?..... that’s right, nothing.

All men should be castrated at birth, done with problems.

What about the Muslims? They suck goat dick

Can’t do that. Too many hot young sluts want to get fucked hard.

Kansas? he should be in prison

If you still go to a catholic church you're a dumbass. Only God lets pedo's hang out at his house.