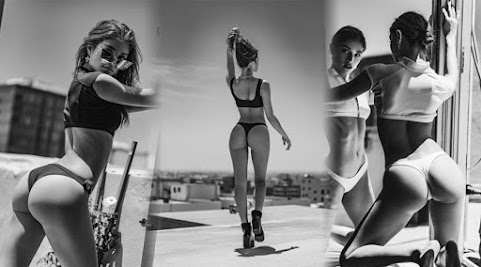 Despite midday inspiration from hottie Daniela the odds are that most of us will give up resolutions in the next few hours. Nevertheless, here's a bit of inspiration for those keeping up the fight . . .

Atlantic: It’s the Most Inadequate Time of the Year

CNBC: Why Melinda Gates selects a ‘word of the year’ and not a New Year’s resolution

Even better, closer to home we're sharing these local news links for the denizens of our blog community. Checkit:

The momentum for Patrick Mahomes as the NFL's MVP continues to pick up. On Tuesday, NFL.com writer David Carr released his end-of-the-season offensive player rankings, and to nobody's surprise, Mahomes finished at No. 1. "Mahomes didn't waste time in his first year as an NFL starter, setting record after record," Carr wrote.

Lexington Legends MJ Melendez - photo credit Clinton Riddle (@TheGrandOldGame) Better. Things are looking better. None of the top prospects took a step back in 2018, and all are still showing breakthrough potential. The Royals loaded up on much needed pitching in the 2018 draft, and have the 2019 #2 overall pick in their pocket moving forward.

KANSAS CITY, MO (KCTV) -- The New York Jets say they have concluded their interview with Chiefs offensive coordinator Eric Bieniemy. According the NFL Insider Ian Rapoport, this was the Jets first interview. Bieniemy is a popular head coach candidate heading into the playoffs and offseason.


The Chiefs' 2019 Opponents are Now Finalized

Here's who the Chiefs will be playing next season

OVERLAND PARK, KS (KCTV) -- New year and new you! Many of people will be hitting the gym extra hard this 2019. It's a resolution many try to stick to, but it can be difficult. Experts suggest starting off slow like walking on a treadmill. Be patient with yourself.

The city is reminding folks that our trash services are basically on par with Venezuela.

Daniela doesn't talk to black guys. Unless they drive a Lamborghini.

Ass for the masses.

The Army, in Need of Recruits, Turns Focus to Liberal-Leaning Cities